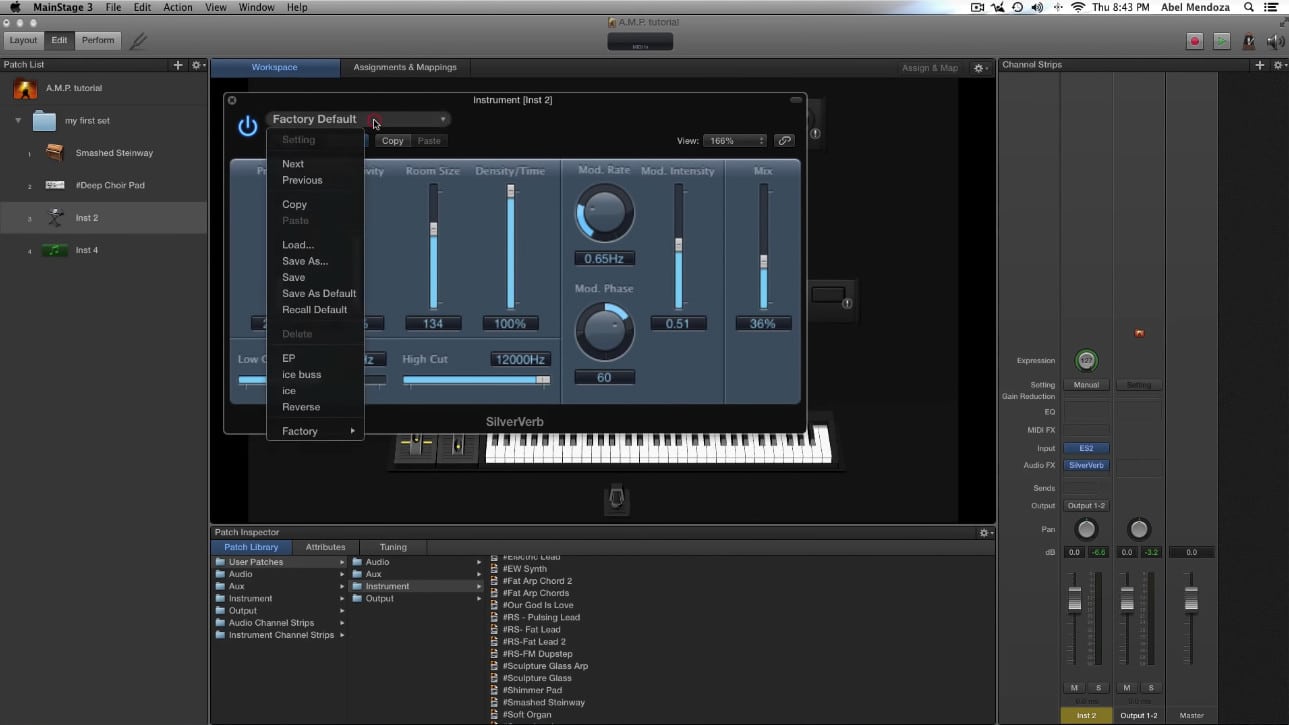 Apple’s MainStage 3, now available for download on both OSX and Windows, is a solid purchase for pretty much anyone looking to amp up their stage presence. Bringing together a huge variety of instruments and audio adjusters into one colossal app, MainStage 3 lets you do anything you want with your music on practically any instrument. Although you might have a bit of a learning curve if you’re just starting out, this software’s price makes for an easily worthwhile investment.

With 80+ synthetic instruments to play around with, 1,800 patches, and 4,600 pre-recorded loops, there’s really no limit to the how much this app will let you experiment with sound. Play around with Retro Synth to throw in some 70s- and 80s-style synth sounds, or create new ones with Alchemy. Everything about this software is incredibly flexible. You can process vocals, mix and loop tracks, or add in as many backing tracks as you like to give yourself a sound unlike any other today.

There are also a ton of more specialized tools. The Drum Kit Designer, for instance, gives you the ability to swap out pieces of a traditional drum set with instruments from all over the world. You can tune and adjust these, just like you would with real drums. There’s also a presets section, along with a Dub Machine that lets you produce beats without a clunky configuration process. This makes this kind of stuff available for folks who don’t want to have to deal with hyper-specialized software.

This app is also really good at letting you play around as much as you like with your performance without ever really having to think too much about it. Just plug in and play. Love the keyboard? The Arpeggiator lets you bring out more sounds than are even possible with your own two hands. You can set up chord triggers so that pressing a single note will send out an entire complex chord, or bring out the authentic sounds of everything from an organ to an electric piano.

Other instruments come with just as many options. Vocalist? Control the effects you add to your performance with the foot pedals, so you never even have to stop singing. Guitarist? This software lets you seamlessly transition between patches, trailing off naturally and coming back in with a totally different sound.

Apple doesn’t seem to be able to let a product slip out of their hands without first making it beautiful. Mainstage 3 is no exception. It’s a clean, intuitive interface. Now, obviously there’s always going to be something of a learning curve with software that has as many capabilities as this, but that’s not really much of a complaint. It might take you a little while to figure out everything you’re able to do since there are so many features.

There’s a lot you’ll be able to figure out right off the bat though. You get a whole range of performance templates to mix and tweak, and you can also just scroll through the Patch Library to find a sound you want to rework into something completely amazing.

It also hooks up super easily with hardware. Plug your computer into pretty much any external MIDI device you can find, and you’ll be good to go.

There’s honestly not that much to complain about when it comes to this app. It’s about as good as you can hope to get in the $30 range, and besides, at those prices, you’re not going to feel that put out if you download it and for some reason decide you hate it. It can start being a bit of a drain on disk space if you get crazy with your downloads—the app itself only takes six gigs, but there’s another 51 of optional content you can get later on—but it’s hard to look at that kind of variety and gripe about how much space it takes up.

The one serious drawback to this app is probably that it’s designed for 64-bit plugins, so, true to form for Apple, any 32-bit plugins you were hoping to use are totally kaput. This might not be much of an issue for some people, but if you’ve been relying on older software you’re going to have to upgrade a lot of it if you want to keep using it.

How to Acquire Mainstage 3 for PC

Assuming you already have a laptop or desktop computer and access to the internet, all you really need to get Mainstage 3 for PC is an Android emulator. Android emulators are a kind of software that simulates the operating software of an Android device onto your computer. As long as you have this emulator you will be able to use apps that can normally be used only on Android smartphones.

Bluestacks emulator is arguably the best Android emulator on the internet. Not only was it recently updated to include a better interface and fine-tuned compatibility with more software, it is completely free. You can locate and download the Bluestacks emulator from the official website here.

Once you’ve downloaded Bluestacks, proceed to click on the .exe file to install it. The installation process should only take a minute or two depending on your computer. Once it’s done, open it up and you’ll see a search bar. This is essentially your new Google Play Store or Apple App Store. Type in mainstage 3 and press enter. You’ll see the app come up in the list of results. Download it and it should be done in a few minutes as the Mainstage 3 app is larger than your average app.

Now you have Mainstage 3 for PC available on your desktop or laptop computer. It can be activated at any time as long as you have your Android emulator open.

All in all, the MainStage 3 really is a great piece of work. It comes with a mind-boggling array of instruments, patches, and loops, you can boost and tweak your performance live, and you can edit tracks as much as you like in your own time. It’s user-friendly, it hooks up easily to any instrument you could reasonably expect it to, and you’d be hard-pressed to find too many flaws. What more is there to say—it’s just good software.