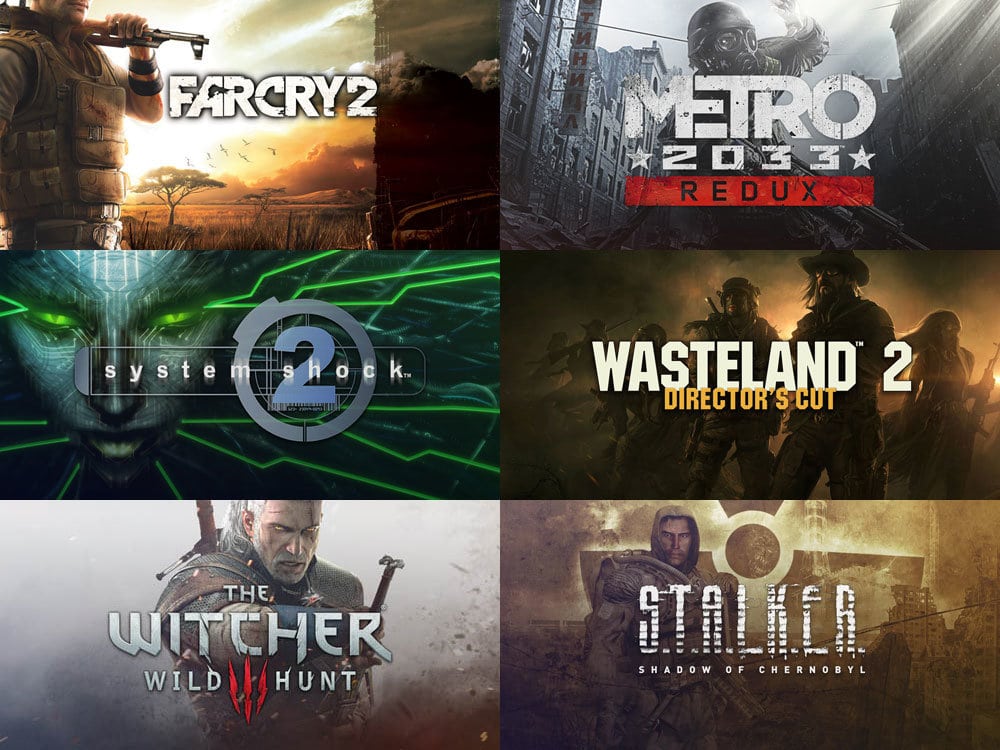 Want to know the worst thing about playing an excellent game? Once you’re done, it’s difficult finding a game just like it. Living up to high expectations is a common theme in the video game industry. With hundreds of series producing thousands of sequels in total it can be near impossible to please everyone – but we’re still going to try. Today we’re going to look at the top 6 games like Fallout 4.

Fallout is a series that requires no introduction. Even if you’ve never played any of the Fallout games, you probably already know what they are about.

The real problem with comparing Fallout 4 or any of the other entries in the series to other games is that they have so much to offer. Because so many millions of people play Fallout 4, there’s going to be a huge list of reasons why people play them. That’s why our list of games like Fallout 4 reflects this.

There are so many reasons why you might love playing Fallout 4. Maybe you like the action and combat, which mixes RPG elements with classic first-person shooting mechanics to give it the unique flair it has. Maybe you just love the post-apocalyptic setting and the incredible atmosphere, immersion and opportunities for exploration it offers. It could be that you enjoy the raw thrill of video game violence, or the desolate sense of survival in an extremely hostile environment.

All of the games on our list below will have something to offer you that will give off a similar mood or feel to Fallout 4. They may be different at first glance, whether due to their genres or their styles, but these are undoubtedly the best games that are like Fallout 4.

And no, we won’t be picking any other Fallout games or any Elder Scrolls titles either. We assume you’ve already thought of those examples. We care more about showing you games similar to Fallout 4 that you might actually have not heard of yet.

You may be wondering, whether you’ve played the Far Cry series or not, why I chose Far Cry 2 and not one of the later titles. There are a couple of important reasons why I think the second Far Cry is one of the best games like Fallout 4.

Not only was Far Cry 2 a watershed for the series that put them on the map, it still accomplishes something that was a little lacking in Far Cry 3, and was very much absent in Far Cry 4.

Even though it may not have any RPG elements and it doesn’t take place in a post-apocalyptic setting, Far Cry 2 makes you feel some of the very same things you feel when playing Fallout 4, or even Fallout 3 and New Vegas. Far Cry 2 is excellent at instilling dread and apprehension in you as you roam the game.

Far Cry 2 takes place in an unidentified African state. You play as a lone mercenary hired to execute The Jackal, a man who sold weapons to both factions in the middle of an escalating war. Throughout the game you can make friends, improve your reputation, acquire blood diamonds to purchase new weaponry, and get lost in the tropical and desert settings as you make your way to your next objective.

If there’s any difference between Fallout 4 and Far Cry 2, it’s that the latter is relatively realistic. Guns are old and they jam on you often. Your map can only be accessed in real time and it takes up a slot, just like weapons do. Even worse, your protagonist is infected with malaria and must seek out medication every time he becomes symptomatic.

It’s brutal, it’s desolate and it is exhilarating, and that’s why it is a game like Fallout 4.

Just like dealing with radiation sickness in Fallout 4, this game has you dealing with malaria. In both games weapons look rustic and have little durability. They both take place in unique open-world environments that have been scarred by battle and strife. Last but not least, both games have you playing as a lone wolf ready to make his name and his reputation known to all.

Far Cry 2 is considered a primary innovator of this kind of game and fans of Fallout 4 owe it to themselves to check it out.

If there’s any game that Fallout fans need to play then it might be Wasteland 2 – not just because of how fun it is but because of the history that is behind this game.

Long story short, Wasteland 1 was developed by the same original team that worked on Fallout 1 and 2. This team was known as Interplay Productions. It wasn’t until the early 21st century when Bethesda obtained the rights and then produced the landmark masterpiece Fallout 3, a game that changed the industry.

While Interplay Productions went defunct, its founder Brian Fargo formed a new company, inXile Entertainment. And they were the ones that developed Wasteland 2. In other words, this game is made by the original creators of the Fallout franchise, and boy does it show.

If you’ve never played the original Fallouts then you may not know that they operate very differently from the modern Bethesda renditions. Wasteland 2 functions much like Fallouts 1 and 2 did. Despite these old-school mechanics, it is a game that is very much like Fallout 4.

The gameplay is probably most comparable to Fallout 2, although we can use XCOM as a more modern example. Action is indeed turn based like any old style CRPG, but the atmosphere and immersion in this game is astounding, much like Fallout 4.

And just like Fallout, there is a ridiculous amount of mutated freaks to fight and a massive list of side quests. The control scheme may feel different but there’s no doubt that if you are looking for a game that looks and feels just like Fallout 4, Wasteland 2 may be your best bet.

One of the more underrated games like Fallout 4, Metro 2033 has you fighting demonic entities from an unknown source and tribes of humans who don’t agree with your agenda.

Based off of best-selling Russian novels and developed by a Ukrainian studio, Metro 2033 is a slow and dark first-person shooter. The most obvious similarities between this game and Fallout 4 are some of its best features: the radiation system and the subway tunnels.

By far some of my best memories in both Fallout 3 and 4 were roaming the underground subway systems. They were gloomy, dark and oppressive. They were always exciting because great treasure and secret areas were likely to be found there, but they also came with a sense of anxiety. Anything could be around the corner.

Metro 2033 is a game like Fallout 4 precisely because you spend most of the game in a situation like this.

The radiation and gas mask system showcased some of the game’s finest moments. Occasionally you will head above ground to find alternative routes. The game has you sneaking past monsters and scavenging for gas masks that don’t have cracked glass or faulty filtration systems.

For anyone that loved the darker and atmospheric moments of Fallout 4, Metro 2033 is a brain-dead choice.

Much like Metro 2033, the Stalker series does a remarkable job of creating the same post-apocalyptic feeling provided by Fallout 4. You explore an open world that has been utterly decimated by nuclear fire and you have to survive the irradiated wastelands.

While it may be lighter on the RPG and shooting aspects, this is a great game like Fallout 4 because it has superb immersion. The exploration in this game is top-notch and arguably better than Fallout.

It’s an older game so don’t expect it to have the same in-depth character or weapon customization as newer titles. But what I said earlier about Metro applies here as well. This is a game like Fallout 4 if you are all about exploration, interesting NPC interactions and a post-nuclear aesthetic.

Here’s something for fans of story and RPG elements. While these don’t seem to be games like Fallout 4 they have a lot of content that reminds people of how Fallout’s optional content works.

What most people say they like most about Fallout is just having the ability to explore in any direction and still find memorable encounters and quests. If that’s your cup of tea then you should definitely check out The Witcher.

The reason I have these two games tied here is because we’ve all heard about how amazing the Witcher 3 is, but we rarely here about how great the second game is too. I agree that the third game is superior but only slightly so, in my opinion.

While The Witcher 2 isn’t open-world, both games are like Fallout 4 with their ability to keep you intrigued no matter who you’re talking to or where you are. You know a game is great when you can just go off on any beaten path and still find something interesting to do.

Like Fallout 4 there are multiple dialogue options with various NPCs. Witcher 3 in particular has way more side quests than main quests, again just like Fallout 4. And no offense to Bethesda but Fallout’s writing and story, as entertaining as it can be sometimes, doesn’t hold a candle to what games like Far Cry or The Witcher have accomplished.

People who play Fallout 4 for the always satisfying side quests, dialogue and exploration should definitely check out both of these classics.

It was classic games like the original Deus Ex and System Shock 2 that have had a major yet somewhat unrecognized impact on modern day game design. They may be outdated in some aspects but they still were crafted with the same kind of ambition and mentality that fuels modern games like Fallout 4.

System Shock 2, like Fallout 4, is a mix of RPG and FPS elements. It has one of the best stories in video game history, non-linear level design and a futuristic sci-fi aspect. Similar to perks in Fallout, you can level up your character with some astonishing abilities that will annihilate your enemies.

Perhaps more importantly, System Shock 2 still holds up to this day because of its gripping world. It’s engaging to explore and see what kind of freakish opponents are waiting for you, just like Fallout 4. Take away the post-apocalyptic setting and the retro aesthetic and these two games actually have a lot in common.