Discord Text Formatting: How to Bold, Italicize, Underline, and Strikethrough on Discord 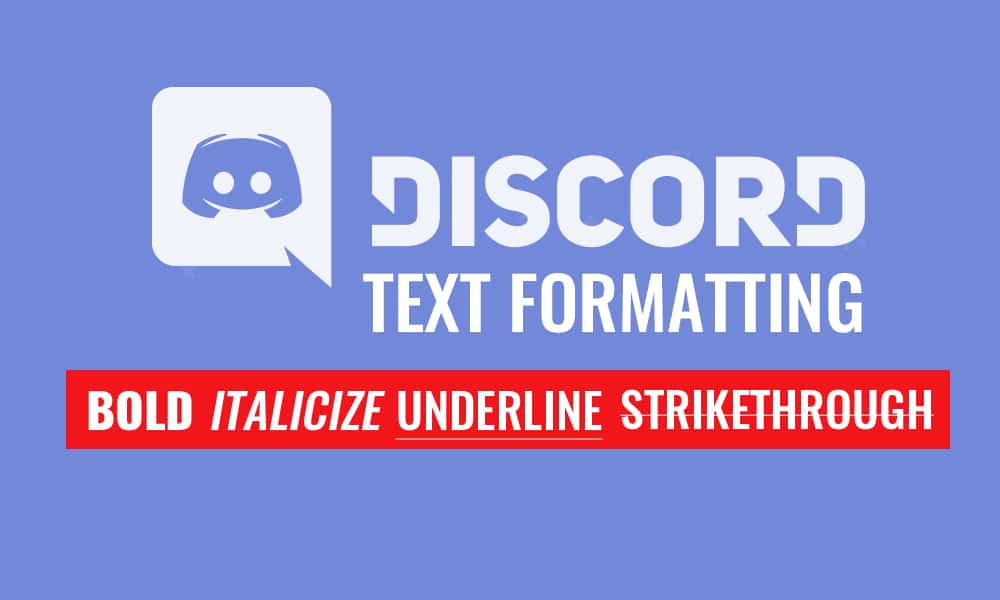 Discord has become one of the world’s leading platforms for groups of people to effectively share and communicate for free. It allows users to interact with each other in communities and groups, via voice and call, text, image, and video content. Although originally designed for gamers, it has become a popular choice for people with any kind of shared interest or hobby.

If you’re new to Discord and you’re wondering how on earth people add formatting to their chat text, you won’t need to embarrass yourself by using trial and error. After reading this, you’llbe able to add a little personality to your Discord messages.

Discord uses a simple plaintext formatting system called Markdown. This article will take you through the basics by providing clear instructions for how to bold, how to italicize, how to underline, and how to strikethrough text on Discord using the Markdown system.

Before proceeding, note that in order to format your text in Discord you’ll need to be able to locate and use a couple of different symbols:

Note: These keyboard shortcuts can differ country by country, so make sure to find out how to get an asterisk and tilde on your own keyboard.

How to Bold Text in Discord

Adding bold to text helps to draw attention to a main point or term, or to emphasize a game title or character name. Being able to differentiate a specific word or term from the rest of a message will come in handy when trying to get your message across.

To bold text in discord, simply wrap the text you want to appear bold in double asterisks, **like this**

Whatever text lies between the two sets of double asterisks will appear bold in your message, once posted.

How to Italicize Text in Discord

Italics are great for creating an emphasis on a particular word or point within a text message. Like bold, it can also be handy for formatting a game title or name.

To italicize text in discord, you’ll need to wrap the text you want to appear in italics with one asterisk, *like this*. Whichever text lies between the set of single asterisks will appear italicized in your message, once posted.

How to Underline Text in Discord

Underlined text is another useful formatting tool for sprucing up your message and drawing attention to a word or point.

How to Strikethrough Text on Discord

Strikethrough text comes in handy when you’re making a sarcastic joke, or if you want to purposely show that you had an afterthought or made a correction to an initial thought. Text with strikethrough formatting appears as though it’s been crossed out, like this.

To format strikethrough text in discord, you will need to use the little horizontal squiggly line, officially called a tilde. Wrap the text you want to appear in strikethrough with two tildes on each end, ~~like this~~. Whichever text lies between the set of double tildes will appear to be crossed out in your message, once posted.

For quick reference, the points above can be summarized like this:

If you want to take it a step further, you can even combine some of these formatting options, such as bold and italics.

To create text that appears bold and italicized, you’ll need to wrap the text in sets of three asterisks. ***like this***

Now you’ve got the basics, try them out. Add a little flavor to your discussions on Discord by using bold, italics, underlined and strikethrough formatting. Once you’ve used them a couple of times, it will become easy and you can move on to more complex Markdown formatting options.