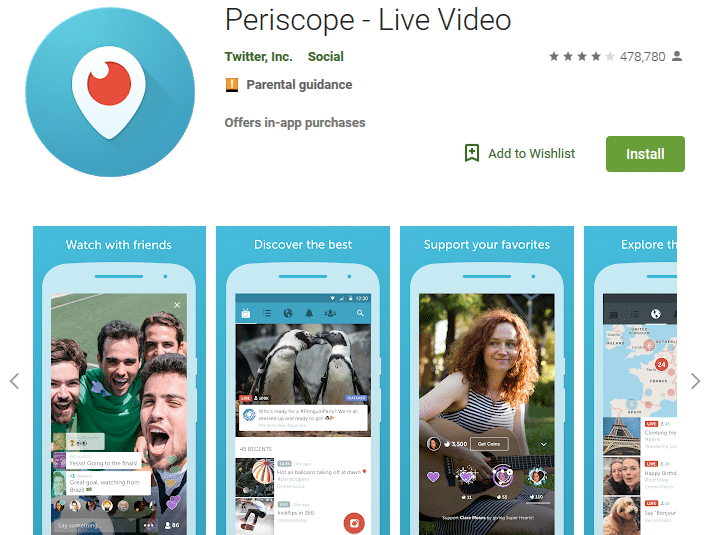 Periscope is a great tool for Twitter users who want to step up their video streaming. It originally came about as a direct competitor to Meerkat but has since totally eclipsed the competition. Periscope is now the most used app for this kind of functionality.

Both services have very similar functions but let’s go through why we are recommending Periscope instead. Both tools are used for broadcasting yourself, essentially setting up a live stream that you post onto social media in real time. The link that your Twitter account posts will be a URL leading to your live video. Your friends and followers will be able to see it and like it and retweet it very easily, ensuring that more people see your content.

But there are key differences that make Periscope undoubtedly the superior choice. For one, this newer app is already more popular. This means that more of your followers use it and you have greater potential to reach a larger audience. Another big difference is that Periscope videos can be continued to be viewed after the live session ends. Meerkat broadcasts can only be seen as they are on the air, so to speak.

There’s still a time limit on viewing the videos, generally by midnight of the day of broadcasting. But this is still enough time for many people to get caught up if they’re only a couple of minutes or hours late.

You can try out Periscope for free by checking out the download link here. It’s convenient to use and you will be able to start streaming yourself within a minute after a few easy button presses.

Periscope also contains a trending feature that will show you what broadcasts are currently doing well in the rankings. This will allow you to easily see the most popular content and give you an idea as to how to structure your own live streams. But Periscope is meant for showing off quick and easily digestible clips. Leave the extended theater and debates for another medium and platform.

Periscope is a great platform to use both as a viewer and as an uploader. As the former, you will have incredible access to a never ending supply of trending content that is always fresh and new. As the latter, you will have more of an opportunity to get yourself exposed, especially when used in conjunction with other similar social media apps or platforms.

It’s a great addition to your pre-existing social media habits. Introducing some more video content and diverse media formats is always a good way to rise up in the rankings and get yourself out there.