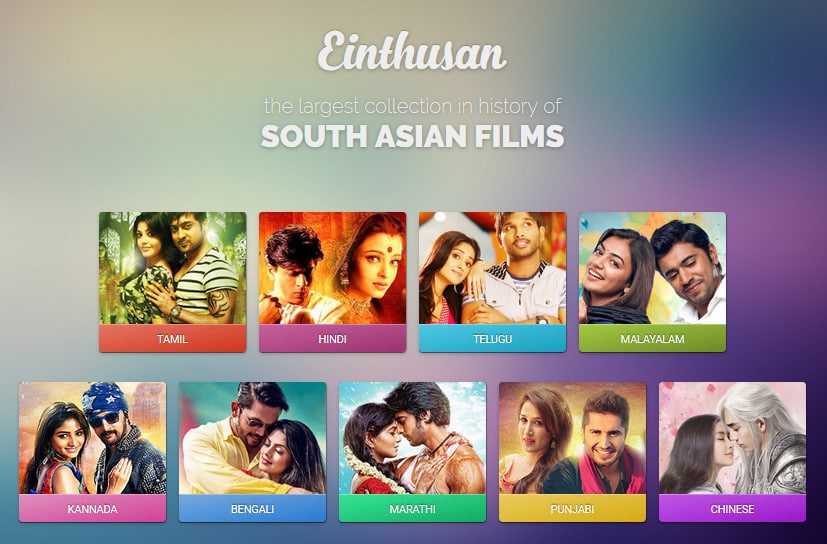 It’s a funny looking word that might be a little tricky to pronounce but it is fast becoming the most popular online video hub for South Asian content. Einthusan is the name, and their repository is made up of a large collection of South Asian films in HD, offered in a variety of languages.

What makes a service like Einthusan so unique is that it is totally free to use. While Netflix and Hulu have several packages that are all behind a pay wall, there are only two options when you’re dealing with Einthusan: a freebie mode and a premium subscription plan.

The differences between the two are quite simple. The free mode has a cap of 512kbps, or half a megabyte, on how much you can stream at a time. There is also limited ad placement to not get in the way of your viewing experience. You also still have complete access to all HD content. Arguably the biggest downside is that you have to wait three days after release to have access to the latest content.

The premium mode differs in that the streaming cap is six times higher than the free option. Your cap is increased to 3mbps. There is also no time limit set on new releases and you can watch them as soon as they are released. Additionally there are absolutely no ads in this payment plan. Advertisements are Einthusan’s main source of revenue to host programs and videos. The fact that they can offset this with one-time only payments is interesting and impressive.

Calling it a “payment plan” is a little misleading, though. You only pay $25 once and you’re good forever. Einthusan only requires this one-time payment and you’ll have the premium benefits forever. This is another one of the unique aspects of using this service instead of having to deal with a monthly bill like so many other online streaming websites.

Einthusan’s main goal is to provide as much South Asian content to the internet as possible. They have collected content from nine regional languages of India: Tamil, Hindi, Telugu, Malayalam, Kannada, Bengali, Marathi, Punjabi and Chinese. They want as many people as possible to use their services, thus their diligence in acquiring as many languages and dialects as possible.

Their video player is compatible with smartphone devices and gaming consoles as well.

The other thing that needs to be said about Einthusan is that they are openly hosting pirated content. The thousands of films they host are all copyrighted content. It is unclear whether they are ripping discs of movies and uploading them, or downloading films from a different online source and then uploading them to their own site. Whatever the case may be, the fact remains that what Einthusan does is against the law.

What does this mean for you? Will you get in trouble if you register with Einthusan? We find this to be somewhat unlikely. It is true that ISPs and entertainment corporations do occasionally crack down on users who access copyrighted content but their main concerns are with the distributors, not the clients. Should you practice some safe internet conduct and try to protect yourself in the unlikely event? Probably, yes. If you’re really worried about this sort of thing then all you would need to do is get yourself a VPN to mask your IP address and your online actions.

Some people have said that because of Einthusan’s conduct that they won’t be in the game for very long and that it’s only a matter of time before they are taken down. If it’s too good to be true, then it probably is, as the saying goes. Odds are Einthusan will eventually have to be shut down, but not anytime soon. Many popular services giving access to even bigger and more popular copyrighted content have managed to survive for years.

Is it a Good Idea to Use Einthusan?

All in all we see little reason not to take advantage of what Einthusan has to offer. Some comments on the internet have accused their ads of spreading malware but we’ve seen no real evidence to support this claim. Having good computer hygiene and a strong firewall is always a smart move but it looks like that won’t really be necessary when using this site.

Editor's Rating
9 Overall
2 Users (4 votes)
Interface9
Security7
Content10
Price10
Summary
Ultimately, users of the service have had very positive things to say about the website. The video browser is well made, the amount of films to watch is impressive, and the one-time payment feature is a simple and effective method. Einthusan may be a little on the shaky side of things but there’s no denying that what they do, they do well.
What people say... Leave your rating
Sort by: