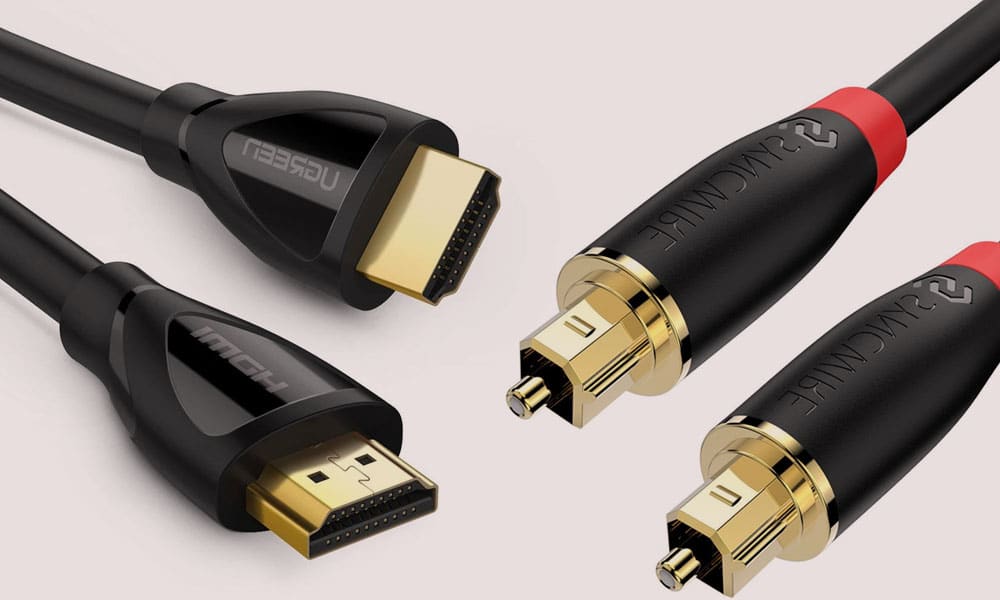 Some audiophiles have quite a reputation for being obsessive over which cables to use in their audio or home theater system. While I wouldn’t recommend spending way too much money or time thinking about it, it is true that the right kind of cable can make a bit of a difference. Some high end audio fans swear by using digital optical cables for their 7.1 surround systems, and others say that HDMI works perfectly fine in any circumstance. So which one should you use for your soundbar and home system? Let’s find out in this breakdown of using either HDMI or optical cables for your soundbar.

The Basics of HDMI

HDMI stands for “High Definition Multimedia Interface” and has become quite the dominant connector in today’s technology landscape. We use HDMI all the time when it comes to connecting PCs, video game consoles and many other devices to a TV screen or a computer monitor.

The gist of it is that HDMI cables are capable of transmitting large volumes of data in short periods of time. This makes them a great choice for streaming high quality video and audio with Blu-Ray players being a common example.

The Basics of Digital Optical

The digital optical cable is not quite as popular as the HDMI but many of the basics are fundamentally the same. The core difference is that optical cables use fiber optic cables to transmit data instead of the standard materials used in most other cables, just as the name of the cable implies. Fiber optic materials are capable of transmitting more data over longer distances for more efficiency.

While fiber optics are used often in IT based professions, their use in the sphere of home entertainment is meant for providing clearer signals, particularly when it comes to audio. Many headphone and stereo amplifiers, speakers, soundbars and even video game consoles have a digital optical port that is meant for improving audio quality with devices that don’t have an HDMI port.

One big issue is that digital optical cables don’t relay video signals – they can only be used to transmit audio. HDMI on the other hand is capable of transmitting both.

Another thing to keep in mind is that while most digital optical cables can only go as high as 5.1 surround sound, HDMI can be used for other kinds of audio systems including Dolby True HD and DTS HD.

Deciding whether you should go for an HDMI or digital optical based set-up is really going to depend on your current gear and the nature of your home theater itself.

For one thing, it is necessary to check the inputs of your devices and see what is available. HDMI is very universal these days and almost every soundbar will connect to your TV via HDMI.

However, depending on how many external speakers you have and how far away they are from your TV and soundbar, this can limit your cable choice. For one thing, it can be complicated connecting a soundbar to external speakers, wirelessly or with a wired set-up. Many soudbars are designed only to work with included speakers or with specific brands.

You will also need to check to see if your TV actually has a digital optical output port. Many newer HD or Smart TVs do indeed have one but yours does not then you will be by default limited to connecting your soundbar to your TV via HDMI only.

It is also very important to keep in mind what kind of audio set-up you will be using for your home entertainment system. Digital optical does not support certain set-ups like Dolby True HD or DTS-HD. If you have a dedicated surround sound system that takes advantage of these things then you will want to pass on digital optical and opt for HDMI.

Another thing to keep in mind is how many audio channels you will be using overall. For a simpler 2.1 set-up, optical can work just as well as HDMI. If you are using something like 7.1 surround sound then HDMI will be easy.

Is There an Audible Difference Between HDMI and Digital Optical?

One of the most prevailing questions in this part of the tech world is one of many audiophile debates regarding just how much better one cable sounds over the other. Much of this debate is fueled by observations about the components used in different cables and how this reflects the clarity of the signal.

Both HDMI and digital optical cables are capable of transmitting high volumes of data, but it is at least theoretically true that optical cables should be capable of providing a cleaner audio signal. But is this actually the case?

Unfortunately, the answer is a little complicated – it depends on many different factors. While some people claim that digital optical provides better audio than HDMI, HDMI cables are capable of transmitting higher resolution data, including Dolby True HD.

However, figuring out whether HDMI or digital optical has better sound is not something that can be figured out on paper. It needs to be tested in person.

If you have access to both kinds of cables then all you have to do is use them both and see for yourself if you can detect a difference in audio quality. The best way to do this is to test the cables with something you are extremely familiar with, like one of your favorite songs. Listen to the track with HDMI and then again with digital optical and try to see if you can hear a difference.

The odds are that you probably won’t, and this is for a couple of reasons. For one thing, you would need some particularly high-end speakers to notice any kind of subtle difference between audio cables. While there are many great soundbars or subwoofers that come at affordable prices, they probably won’t be well equipped to deal with the nuances produced by different cables. You’re free to run the experiment for yourself and your own ears, but don’t expect to hear much of anything, if you detect any differences at all.

When it’s all said and done, it Is my recommendation that you should just stick to using HDMI for your soundbar and any other related audio peripheries. The fact of the matter is that HDMI is more versatile, more commonly found on more devices and is capable of higher-end audio formats.

Digital optical cables do have their uses though. When one owns a speaker, soundbar or stereo amplifier that does not have an HDMI port, digital optical can be a perfectly great substitute. That’s why it can be very useful to have a spare optical cable.

But at the end of the day HDMI is simply easier to deal with and has a more reliable future. It won’t become outdated or replaced any time soon. Plus, having to manage your cables is much easier when you rely on HDMI, as going down the digital optical route means having to use extra cables to handle the video portion of your home theater. The same is true when comparing it to analog audio outputs or coaxial – HDMI just does so much in one package that it’s hard to beat.