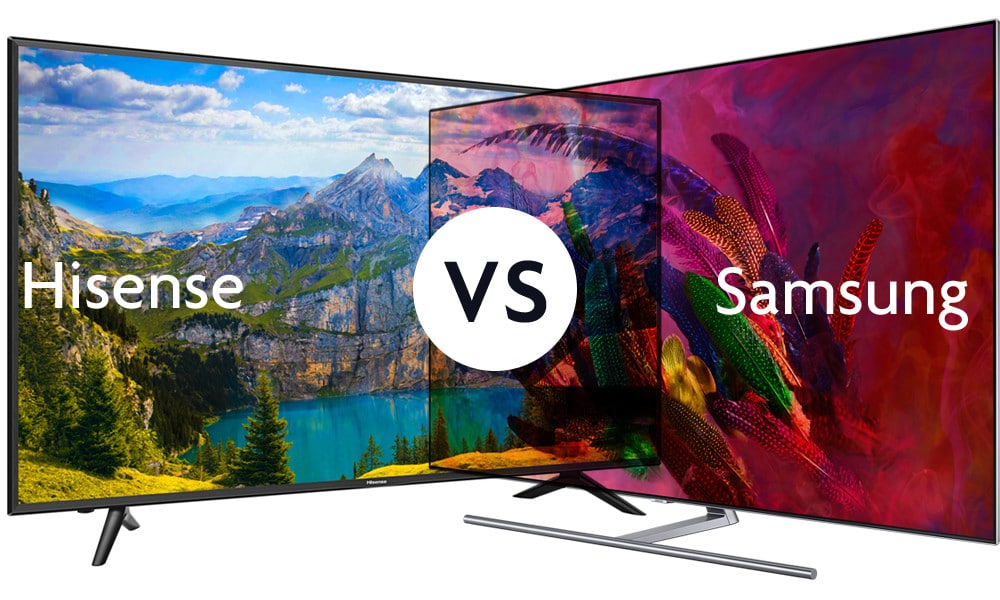 Hisense and Samsung are two of the largest TV manufacturers in the world, and with good reason. The tech giants have been producing top of the range TVs for a long time, each company releasing dozens of TV products that have been met with and overwhelmingly positive response. But who reigns supreme in the current market? We’ll take a closer look at what each company has to offer and which, if any, comes out on top.

Where else to start but the screens? This is a TV’s bread and butter and it goes without saying that, as a consumer, you want the clearest, sharpest, most realistic picture quality available. Each company provides a range of different screens with differing technology. Whether it be due to the resolution, HDR, or 3D compatibility, the quality of the screen itself will always be the number one reason why anyone purchases a new TV set.

Here’s the rundown of what you can expect from each and what they all mean:

These TVs incorporate a layer which glows when an electric current is passed through. This negates the need for a backlight present in more traditional LED TVs. By doing so, OLED TVs can be lighter and thinner. Individual pixels can be turned on and off resulting in better contrast. This technology is considerably more expensive than other forms of LED but the trade-off is that you will get a sharp true-to-life visual experience.

4K, also known as UHD (Ultra High Definition) is a massive resolution that has, as the name implies, four times the amount of pixels as standard HD or 1080p. 1080P has roughly 2 million pixels on screen whereas 4K has around 8 million. 4K resolution provides an incredibly clear image with a much higher pixel density than other resolutions. This makes virtually anything that appears on screen have more clarity and detail to them.

HDR combines multiple images at different degrees of luminosity to create pictures with high levels of detail in both light and dark areas. Any content that supports HDR will display very bright and very dark scenery with unparalleled realism, and has in recent years become a companion feature to UHD or 4K. Content that is available in 4K HDR is still relatively limited though, so only the most die-hard fans of these features have much incentive to get a TV that supports both.

Samsung also have three types of screen technology available in their range: LED, QLED and 8K.

LED TVs are either edge-lit or backlit and illuminate a series of panels. These are some of the most affordable TVs available but have a poorer light display than more modern technologies.

These are essentially Samsung’s equivalent to Hisense’s ULEDs. These TVs feature a quantum filter which enhances color and improves light management in the display. QLED displays can be very bright and are ideal for rooms with ambient light sources. These screens tend to have better viewing angles and handle reflections from external light sources better than their standard LED counterparts.

Hisense uses an operating system named VIDAA U. It uses a simplified design which allows you to navigate through apps quickly and efficiently. They claim that you can access any app in three steps or fewer. The latest update of VIDAA U 3.0 allows for compatibility with voice assistant technologies such as Amazon’s Alexa and Google Assistant.

Samsung uses Tizen as its operating system for its smart TVs. The service is quick and reliable but its app support is rather poor. Searching for apps can be tricky but it is useable.

At the high end, Hisense offers TVs upwards of $1000. These will give you the best picture quality and contrast options but obviously come at a hefty price.

The budget options available with Hisense are available for little over $250 for a 40” screen. The lower end offer 1080p full HD and comes with all the Smart TV options fully enabled.

Samsung’s premium end flagship 98” TV will set you back over $90,000. Needless to say, that is unaffordable for the average person so on the more affordable high end there are TVs available for similar prices to Hisense’s higher end.

At the more affordable end, Samsung offer sets for as little as $300. This is still a cut above Hisense’s most affordable TVs but there is not a lot to separate the two.

While Hisense doesn’t offer TV sets that cost several thousands of dollars, they do offer many competitive and attractive products in the mid-range that are comparable with Samsung’s sets of similar price ranges.

Hisense offers a 55″ OLED with Ultra HD Premium and over 8 million pixels. The O8B comes with Dolby Atmos for lifelike audio and Dolby Vision for cinema-quality viewing. This TV also comes with deep backs for high contrast, a smooth motion rate and a super slim design.

This may very well be one of the best large size Hisense TVs on the market today. A newer model from last year, this set has great color, contrast and brightness, and features some of the best HDR on a Hisense screen.

For the same price, Samsung also offers a 55″ TV. Their offering is a QLED with a 4K Quantum Processor. The Q70R comes with 100% color volume.

Listed as a #1 best seller at online marketplaces, this QLED screen is an excellent choice for someone who wants a TV that comes with many different features. With Alexa compatibility and a patented Ambient Mode that helps the screen blend in with your home’s environment, this is one of the most versatile TVs in this price range hands down.

This budget offering from Hisense comes with a quad core processor and one-touch access to all Smart TV features. DBX Total Sonics and DBX Total Surround combine to give impressive audio quality for a TV of this price. It comes with two HDMI ports as well as two USB ports.

This TV comes with Tizen OS for all the Smart function expected in a modern TV. It has 4K and HDR but suffers from a dimmer screen and worse viewing angles than some of its competitors.

Top of the Range

At the other end of the price spectrum, we have a premium offer from Hisense. They offer a 4K viewing experience with a blue laser light providing unbeatable brightness. This TV uses HDR10 technology to give excellent contrast. It also has built-in WiFi and ready-to-go Smart features in Ultra HD.

This high-end TV comes with 100% color volume, a quantum 4K processor and ambient mode among some of its most impressive features. It is also fully equipped with Bixby – a virtual assistance tool developed by Samsung.

Is Hisense Worth Buying?

As successful as the company has become in recent years, many shoppers are still a little on the fence when it comes to buying a new Hisense model. This is probably due to several reasons, but what are the two biggest ones are that: 1) Hisense doesn’t have the reputation of a household name like Samsung or Sony, and 2) Hisense is often seen as a budget-brand manufacturer only. Some take this to mean that Hisense’s prices are low because their quality is as well.

Fortunately, this is far from the truth. The fact of the matter is that many TV manufacturers have television sets that are priced at only a few hundred dollars that still deliver a great TV experience for the price. Even Samsung has been putting out more and more budget models over the past couple of years.

People should keep in mind that manufacturers have now more than ever mastered the art of crafting a TV. Manufacturers know very well which corners to cut when they want to release a large size 4K Smart TV for under $1000. While it may not have the most perfect HDR or build quality, it will still offer an impressive overall picture for the price you’re paying.

Like with a couple of the budget models we looked at earlier, Hisense is one of the masters of making low and even mid budget TV sets. Sure, they aren’t the most sophisticated or cutting-edge TVs ever made. But as long as we’re talking about the “bang for your buck” philosophy, it is very hard to beat Hisense at this game. Anyone who only wants to spend a few hundred dollars or so would be well advised to keep Hisense on their radar.

Ultimately, the choice is down to you. Both tech companies have esteemed reputations and you will be getting a quality product regardless of which you choose.