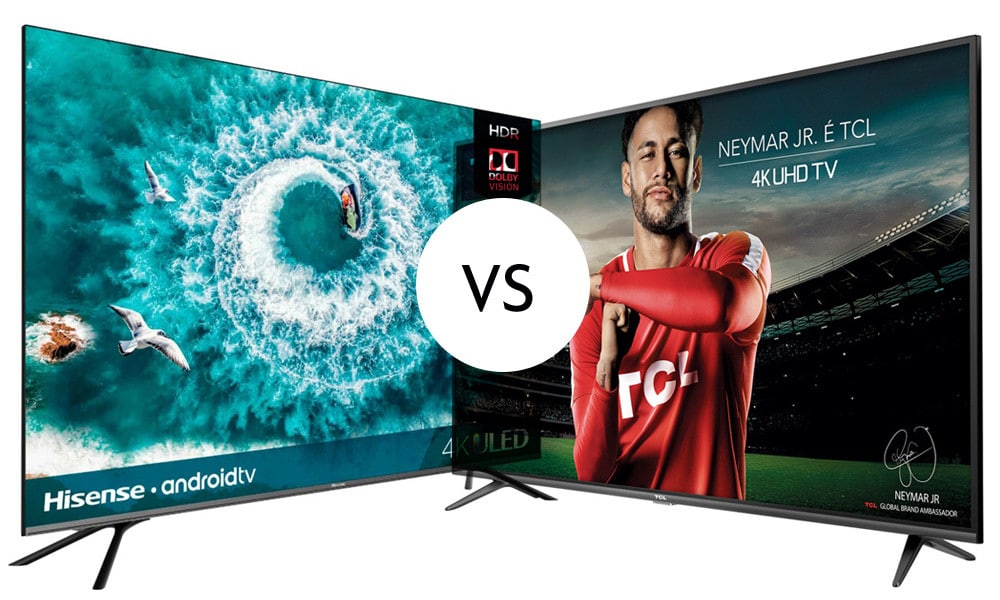 If you’re looking for a new television set that offers a great picture quality for a lower price, your two best bets are going to have to be either Hisense and TCL. While these brands don’t quite have the long running reputation of other TV manufacturers such as Sony or Samsung, there is no denying that both Hisense and TCL have made their mark in the market over the past few years thanks to their high value products. Normally you get what you pay for, but with Hisense and TCL, you actually end up getting quite a fair bit more.

So now we’ve reached the question that has inevitably come into your mind: which brand should you pick? If you want to find out who we think wins in the battle of Hisense vs TCL then our comparisons of both these brands in several key categories will surely have the insight you are looking for.

For some people, the price point is going to be their ultimate factor in deciding on a TV. While there is no doubt that both Hisense and TCL offer very affordable television sets, they can’t both be equal.

For the most part, TCL is the winner of this category. While there are some Hisense models that are a bit more expensive such as the 65” Quantum Dot, Hisense typically ends up being slightly more expensive for mid to large sized 4K UHD TVs by $50 to $100. While Hisense’s popular 50H8F model is a 50 inch 4K set, TCL offers another 50 inch 4K set called the 49S325 for a cheaper price.

If you browse online marketplaces long enough you will find some instances in which Hisense offers cheaper 30 inch models at 1080p. But if you want to go all out and buy a large screen UHD set that is cutting edge, TCL will offer you the better value.

While Hisense and TCL won’t be giving you a perfect picture, they can still both look really good for the price. It really is impressive how anyone can get a large screen set with UHD and HDR and solid color accuracy for lower prices.

Despite that, both Hisense and TCL have their flaws, and for the most part they are pretty similar. What you will end up getting when you decide to go with either one of these brands is a viewing angle and a brightness that just can’t compare with more expensive brands.

What that means is that both Hisense and TCL will not display an optimal image when viewed at angles or locations that aren’t directly facing the screen. The lower brightness ends up having images appear more muted and not as clear.

But while these are issues that many cheaper screens have, TCL still manages to have some impressive picture quality of its own. The TCL Class 6 Series are known to have very good color uniformity as well as a great contrast ratio. That means that the Class 6 sets display pretty accurate looking blacks as well as brighter and richer colors that span the entire spectrum. For this reason alone, TCL produces better looking picture quality than even the best that Hisense has to offer.

While UHD and HDR picture quality are undoubtedly what helps define cutting edge TVs these days, another vital category is how good a TV set is at having Smart TV functions. Both Hisense and TCL do pretty well in this category but there are several smaller details that separate the two.

One of these differences lies in the fact that Hisense uses Android for its Smart TV OS and TCL typically uses Roku. When it comes to the user-interface, my vote has to go to Hisense. The effective use of Android OS makes the menus look and feel more intuitive, plus the Android functionality opens up the door to easier connectivity with things like Alexa, Chromecast and Google Assistant.

Hisense TVs also tend to have more quality of life features. Their televisions almost always have an extra HDMI port or an extra USB port compared to TCL. Hisense sets also have superior artificial intelligence that will automatically calibrate the darkness of the screen to fit what you are viewing.

One of the biggest fears people have when buying a new but cheaper TV set is that it won’t last as long and will have to be replaced every couple of years. There is very little concern that either Hisense or TCL have this issue but from my own experience I do believe that TCL does indeed have the better build quality.

While they both look similar at an initial glance, TCL sets have better support from their leg stands and have frame casings that feel tighter and more durable.

At times, it was a little difficult for me to make this choice as I believe both brands have a lot to offer for what their asking prices are. But when it comes to Hisense vs TCL, my answer has got to be TCL. I really enjoyed Hisense’s TV sets for their smooth Android OS interfaces, their beautiful thin framed and flat screen design as well as their great remote controls. But when it comes to two undeniably important factors – pricing and picture quality – TCL was the winner for me.

TCL television sets are usually cheaper by as much as $100 if you plan on getting a full sized set with the works. Plus, TCL sets offer a crisp and colorful presentation that still brings out a lot of what ultra high definition and high dynamic range have to offer.

While their TVs may be lagging behind just a little bit when it comes to offering a full blown Smart TV experience, they really nail down the fundamentals of delivering good picture quality for a very reasonable price, and this is something that everyone is looking for.