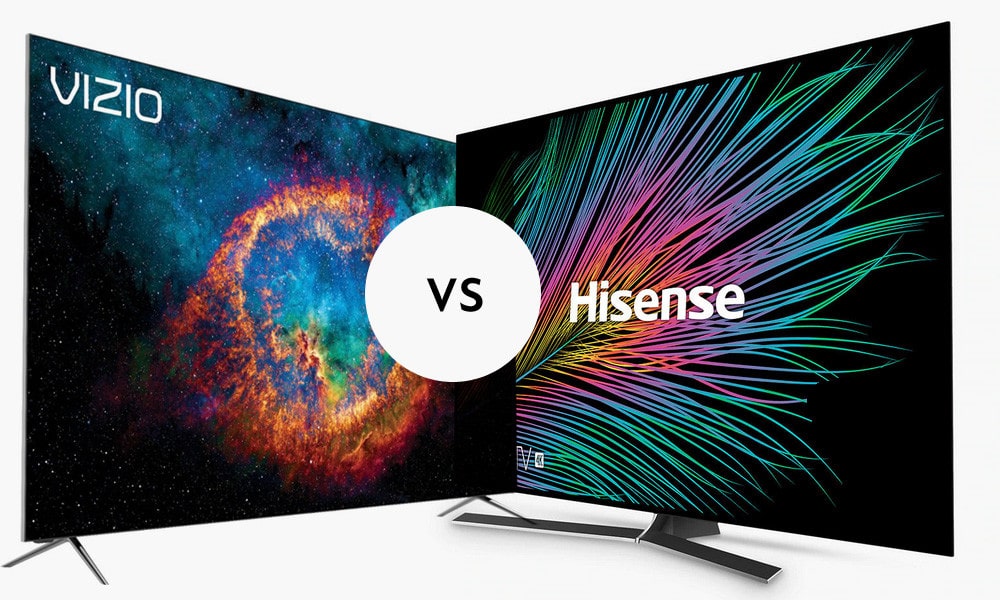 Once upon a time, buying a budget television used to be a much easier task. But these days we are bombarded with as many good value but cheap TV sets as we are with the higher quality ones as well. Now it’s reached the point where we need to put in as much effort in choosing a $500 TV set as we once would with one that costs five times the price.

So if you’re in the market for new TV, you might be wondering which one to get. Two relatively cheap options that are pretty comparable in specs are Hisense vs Vizio.

These two are undoubtedly two of the biggest brand names in affordable televisions that still offer cutting edge features like Ultra High Definition, HDR and Smart TV functionality. While the general consensus is that they are both good for the price, I’m sure you want to find out which one is truly better. So let’s get on with the breakdown of Hisense vs Vizio and put this matter to rest.

Let’s say that you are not the pickiest person when it comes to picture quality. You still want a TV set that has 4K and whatnot, but it doesn’t need to have the most picture perfect contrast, color representation or what have you. You just want a good TV for the cheapest price possible. If so, should you go with Hisense or Vizio?

It seems that Hisense is generally the victor in this category. While both companies offer competitive prices, Hisense tends to be a little bit less expensive even at larger sized TV screens of 50 inches and more. Their bestselling 50H8F model is moderately cheaper than Vizio’s 50” M-Series Quantum Smart TV.

This category is of course independent from other factors that I’ll be going into shortly. But for anyone who really wants to get the most bang for their buck, Hisense will be the more appealing choice.

Hisense vs Vizio: Features and Functionality

Hisense and Vizio both offer a wide range of Smart TV features that will surely satisfy the average TV viewer, but which one of these brands really stands out?

Well for one thing, Hisense is definitely in the lead when it comes to app compatibility. While Vizio televisions support their fair share of apps, the amount that Hisense can support is considerably higher, which makes it a better choice for people who enjoy downloading as many applications as possible.

This is probably partially due to the fact that Hisense TVs use Android OS whereas Vizio sets typically use SmartCast as their OS instead. While some people have different preferences, I much prefer the smoothness and intuitiveness of the Android OS that Hisense has to offer.

Not only is Hisense a better choice when it comes to Smart TV functionality but they are also better when it comes to gaming. Their television sets, the H9F series in particular, have some very impressive motion rate smoothing for fast moving scenes. This feature works well in action films or sports, but is particularly effective for video games with high refresh rates and fast moving action. The reduction in lag that a Hisense TV brings is definitely better than any Vizio TV that I’ve ever tested.

Many of Hisense’s TVs have a built-in artificial intelligence capable of calibrating the picture and audio settings on the fly. It does this based on what kind of content you are currently watching, be it a live concert or a sporting event. This is a really nifty feature I’ve come to love about Hisense and it deserves some more recognition.

Vizio TVs have their fair share of great extra features like built-in voice control, easy compatibility with Apple AirPlay or Apple TV, and other features. But many of these functions can be found on a Hisense set, with more abilities that make gaming or downloading apps feel more comfortable.

Now we’ve reached what is probably going to be the most important category for most people: just how good is the screen’s picture quality? This was definitely the hardest category for me to decide on as both are quite good. It really was a neck and neck battle but I have to go with Vizio on this one.

Let me explain. Generally speaking, Hisense TV sets are a little better than Vizio when it comes to things like brightness and reflections. That means that Hisense screens perform a bit better in brighter rooms as they can display a stronger, clearer image that won’t get overpowered by any external light source.

But Vizio sets are certainly better when it comes to color uniformity and contrast. To be more specific, Vizio TVs display a more realistic color palette and can more accurately distinguish the difference between dark and lighter colors, making each one pop out more and appear more distinctive. Whether we’re talking blacks and grays or blues and greens, Vizio TVs do display just about any color better.

Vizio TVs are also a bit better when it comes to using HDR. Because High Dynamic Range is all about maximizing the difference between the darkest and the brightest areas of a screen, HDR undoubtedly looks better on a Vizio TV such as their 2019 Quantum Series model.

Vizio TVs also have slightly better viewing angles than Hisense, though admittedly you still need to be facing the screen directly to have the best view unlike some of the more expensive brands.

This decision was tougher than I thought it would be but I believe that Hisense is the winner of the Hisense vs Vizio battle. Vizio TVs without a doubt have impressive HDR as well as a great representation of color accuracy for the price. But the fact of the matter is that their TV sets are moderately more expensive and I simply don’t think that that higher price can beat out Hisense’s better functionality for apps or gaming despite a slightly inferior picture quality.

I doubt that anyone looking for a low-budget TV will be disappointed by either one of these brands but when everything is taken into consideration, Hisense offers the better bang for your buck, especially if you are really into gaming and/or Smart TV features.