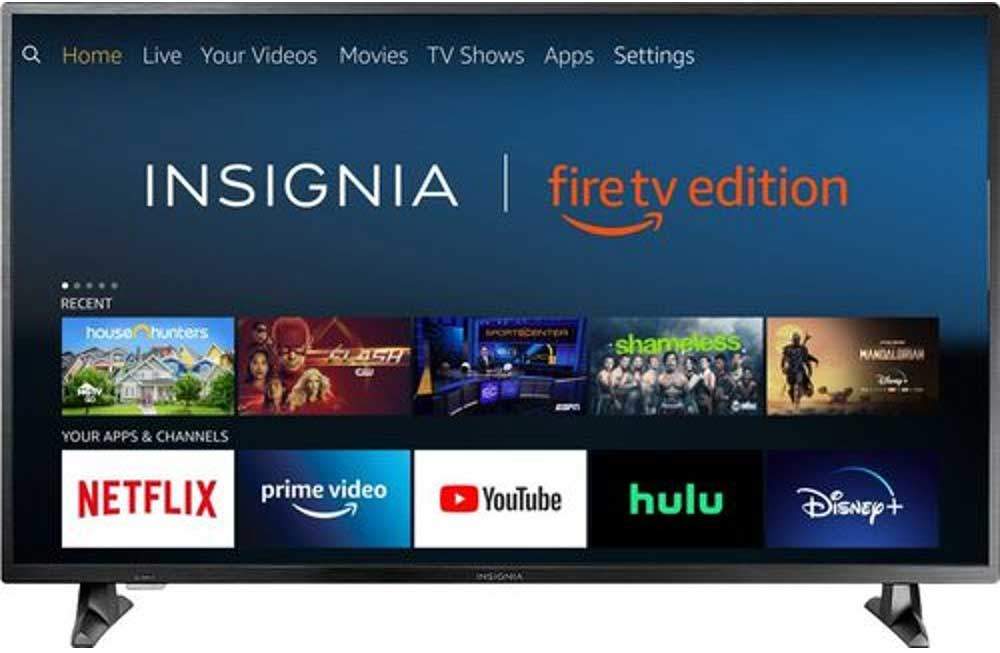 SEE IT AT AMAZON →

If you’re still browsing for a budget 4K large screen TV then you may be very interested in hearing what I have to say about Insignia’s NS-50DF710NA19. It seems as if 4K Smart TVs get cheaper as each day passes by, but that leaves us with one simple question – are low-budget 4K sets providing a good value product, or are too many corners being cut in order to tap into a growing market?

To find out whether the Insignia NS-50DF710NA19 is worth its price, check out my detailed thoughts and first-hand experience with the TV below.

For the most part, the Insignia NS-50DF710NA19 really doesn’t differ from many other 50 inch television sets in this price range. It’s not poorly built, but it is made out of cheap materials in some instances.

For one thing the screen border is a little on the thick side and doesn’t look quite as appealing as thinner borders, whether or not you decide to go for wall-mounting.

The leg stands are thicker than your usual supports but there is still some wobble, particularly from front to back rather than left to right.

The TV frame itself is actually a little thinner in person than I expected, but it still isn’t completely flat.

Overall, the build quality is totally adequate – it won’t cause you any real issues as long as you take care of it well enough, but it isn’t anything too special either.

Fire TV has a great selection of compatible apps and can use HDR in many of its applications. Unfortunately, unlike newer versions of Fire TV, this one does not have HDR support for YouTube, which is unfortunate but nothing that will be deal breaking to the vast majority of users.

The Fire TV OS also has a great interface that is about as easy to use as Netflix’s. If you plan on using Casting or Alexa Voice Assistant then you will really use this Smart TV to its full potential. Overall, I had no major issues with the NS-50DF710NA19’s Smart functions and was very satisfied with its performance.

Let me begin with the good news: the Insignia NS-50DF710NA19 is quite good when it comes to having accurate contrast ratios and 4K resolution display. It also has pretty low input lag which makes it a solid choice as a gaming TV.

Unfortunately, the bad outweighs the good with this set. I found that this set was disappointing in many areas, including color accuracy, viewing angles, and handling glare and reflections. This would be especially annoying in well lit-up rooms or during daytime viewing. Even the HDR was merely decent but I’ve seen better, even on TVs in a similar price range.

The brightness of the NS-50DF710NA19 was also less than satisfactory. The clarity of the picture is not ideal when viewing in the dark. Turning up the brightness or contrast in the TV’s settings made things a little easier on the eyes, but it also messed with the color accuracy and sometimes made images appear slightly blurrier.

While I think the Insignia NS-50DF710NA19’s picture quality will be good enough for someone who just wants an entry-level 4K set, it will be hard to satisfy the tastes of people who have been exposed to TVs that utilize color gamuts and HDR brightness much better. While it does a decent job in a few areas it really lets down in too many other ones. Anyone who has had prior exposure to a higher quality TV set will almost certainly feel that the Insignia is too much of a downgrade.

My final thoughts are that while the Insignia NS-50DF710NA19 is worth the price, its problem is that there are many TVs that either cost the same or slightly more and have better picture quality. Because the build quality is solid and the Smart TV functionality is quite good, it still manages to be a TV worthy of consideration for someone on a tight budget.

If the NS-50DF710NA19 is your best choice or the only TV in this price range available to you, then I would say to go for it. Otherwise, a little more window shopping can have you find a TV with better picture quality for only another $30 or so.