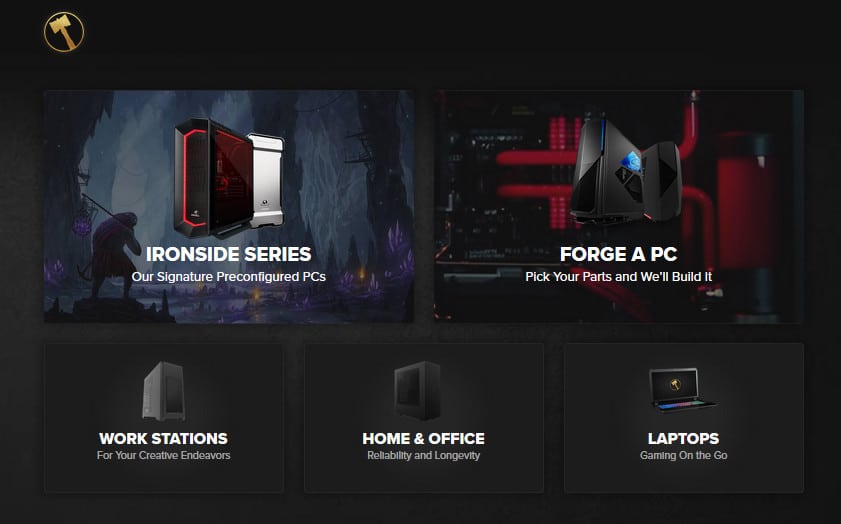 Ironside Computers is an online PC builder for serious gamers who want to take a custom approach to buying their desktop or laptop. Basically, they give you a chance to design your own computer from a wide array of possible specs. You use their “Online Computer Builder” to pick out the hardware you want to include, which they then put together and ship out to you.

Although it is of course more expensive than building your own computer from scratch, the entire process is both well-designed and well-executed. Overall, working with Ironside PCs is an overwhelmingly positive experience.

Ironside really makes an effort to make the process of designing your own computer as easy as possible while still leaving room for maximum customizability. To start with, you’re given the option of selecting either a desktop or a laptop. From there, they give you a few baseline models to choose from, along with four different levels of quality/price: Bronze, Silver, Gold, and Iron.

Once you’ve selected your baseline computer, it’s now time to customize. You’re given a list of every single part that’s included, and you can swap any one of these out for something different just by clicking “Change.” This gives you total control over every aspect of the product. Want better storage? Buy better storage. Want more processing power? Buy a better processor. It’s as simple as that.

After you’ve decided on the exact setup you want, it then gets custom-built, checked, tested, and shipped in a matter of days. Note, though, that they can sometimes take a little longer than they say they will. They say standard construction takes 10 days while rush takes only five, but they have been known to get a day or two behind schedule.

Be fair, though–they are building an entire computer.

These computers are incredibly sleek and professional-looking. The exact look of your computer is going to be different based on the look you’re going for, but everything that passes out of this company’s hands is definitely aesthetically pleasing.

They also leave a good amount of space for further customization later on, so upgrading pieces after the fact isn’t going to be a problem.

Ironside’s website is definitely user-friendly. When you’re designing your computer, it’s always clear what your different options are and what they will entail. You don’t have to go looking too hard for details on any of your specs–everything is laid out for you.

Customer service is probably one of Ironside’s greatest assets. Unfortunately they’re only available during the work week, 9am to 4.30pm CST, but if you can work out the time to contact them during those hours, you’re not going to be disappointed. This company’s entire business model revolves around customizing their product for individual consumers. And don’t worry if you don’t know too much about computers going into this process, either. They’ll help you figure out exactly what you need, and they’ll be patient with you the whole time, too.

In addition to live HR support, Ironside also keeps you very well-informed about exactly what’s going on behind the scenes. You’ll get a clear, professional email every time your computer passes through another step in the process. And again, if you have any questions, customer service is super willing to work with you.

Because everything is so variable based on the kind of product you order, it’s hard to give too many specifics about these computers’ performance. In general, though, you can trust everything to run very smoothly, even with the most exacting of programs. These things are built for serious gamers. They’re fast and they’re reliable.

In terms of pre-loaded software, meanwhile, Ironside computers don’t really come with that much in terms of bloat. They have Windows 10 downloaded during the construction process, but beyond that, it’s really up to you.

Ironside’s website claims that they intensively test every piece of your computer before it’s shipped out, with “multiple stress and benchmark programs that heavily stress each individual component in your computer.” If for some reason something doesn’t work the way you expected it to, though, their customer service is extremely helpful, and they’ll usually get the thing fixed quickly and cheaply.

Overall, Ironside Computers is a very good option for any serious gamer who doesn’t have the time to build an entire PC on their own. They have a good system going. And what’s not to love about a custom-built machine with the exact specs you want?