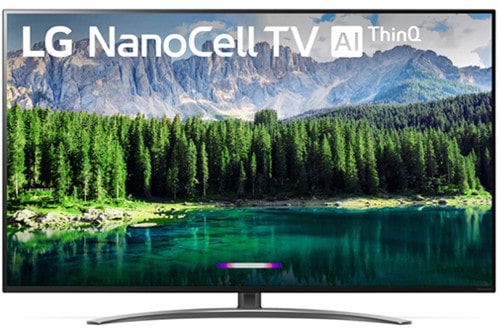 SEE IT AT AMAZON →

The Nano 8 Series of LG’s Smart TVs have been getting a fair bit of buzz lately, so I decided that it was time to try one out for myself. I wanted to test a new TV of theirs that had the works: Smart TV capabilities, HDR and 4K, and even a high refresh rate for gaming. Plus, I wanted a screen that would be fairly huge, so I settled on the 65 inch LG 65SM8600PUA, though we can just call it the SM8600 to be convenient.

I hope you’re as excited to read this review as I was to test out the SM8600. If you’re curious how this TV deals with picture quality, movies versus gaming or its Smart TV functions then you’ll want to hear my thoughts on the matter. Let’s find out of this TV is worth all the hype it’s been getting.

The LG SM8600 has solid construction but for the price I do wish it could have been a little better. The back of the TV is pretty robust and the overall look of the SM8600 is pretty appealing.

The most eye catching thing about the SM8600 is probably its curved stand, which certainly looks nice but is also the weak link in build quality. It certainly works and is by no means inadequate for giving the screen support but there is a little bit too much flexing or wobbling for my tastes. No one should have any problems with this thing tipping over, but a TV this large and in this price range ought to have a more solid foundation.

Overall, the build quality is satisfactory and should cause no major problems, even after many years of use as long as the TV is kept in appropriate locations and is handled well without any major bumps to the frame.

While the build quality is decent, the Smart features are probably where the LG SM8600 truly shines. One of my favorite things about recent LG TVs in general is their WebOS interface that is not only very cleanly presented but pretty versatile and intuitive as well.

The user-interface is definitely one of the better ones out there for modern Smart TVs. It’s very easy to use and it takes literally one or two seconds to access and load up apps like Youtube, so it’s pretty fast as well.

As far as I could tell, the home dashboard got quite the overhaul and looks and feels much nicer to navigate through. I had a wonderful time taking full advantage of this new and improved WebOS and never once felt like I was wading through molasses, as is the case with some other Smart TVs. I have no doubt that the Web OS of this TV set will be more than capable of delivering the same wonderful experience to anyone else.

As we all know, not all 4K and HDR TVs are built equally, and I have to say that I was definitely reminded of that simple fact when using the LG SM8600.

This is by no means a bad looking TV. In fact, it handles ultra-high definition resolution very well. Whether it was for gaming, watching shows and movies on Netflix or browsing images on Google, the pixel density was handled very well for a TV of this size. 65 inches is pretty much the sweet spot for 4K resolution, so this TV did a great job with that.

However, there were some surprising issues I found with other aspects of this TV, particularly its HDR and its picture quality in dark rooms. For one thing, the LG SM8600 does not have good local dimming. In fact the back light of this LED screen isn’t very good at all, which means that images in dark rooms – which is how many people prefer to watch movies or play games – do not appear very clearly.

The HDR performance was also average to decent. I’ve seen many TVs cheaper than this one that had much better accurate representations of the maximum difference between dark and light areas, and the LG SM8600 definitely doesn’t take HDR to its full potential. It may not bother you if you care too much about lighting, color and image accuracy. But anyone who considers this an important aspect of cutting-edge TV design will not be impressed.

On the plus side, the LG SM8600 does very well when it comes to the smoothness of its high refresh rate and viewing angles. This TV does have flickering issues at times but it does extremely well with fast motion and you can comfortably watch this TV from a variety of different distances and angles.

All in all, it’s got solid image and picture quality but I will admit I was moderately disappointed at its subpar performance in certain areas. As I said before, there are cheaper TV sets out there that have superior colors, HDR and brightness. While the overall picture quality of the LG SM8600 isn’t objectively bad, I cannot deny that I found it to be somewhat underwhelming.

Recommending the LG 65SM8600PUA is a little difficult, because I feel that this TV would be great for some people but pretty disappointing for some others. While I personally felt somewhat underwhelmed, I know that there are some people that would really like the look and design of the SM8600. Plus, the Smart TV functionality is very good and for some people that is enough.

However, if you want a 65 inch TV that is really pushing the boundaries of a vibrant and accurate picture, this TV isn’t it. If the price were somewhat lower then I would feel a lot more comfortable recommending it, but the fact of the matter is that there are cheaper TVs or ones that cost the same that are much better looking when it comes to lighting and color uniformity.

The LG 65SM8600PUA is a decent television that really excels in some areas but falls a little too flat in others. If you can find it on sale then it would be a worthy purchase but otherwise you could do better.