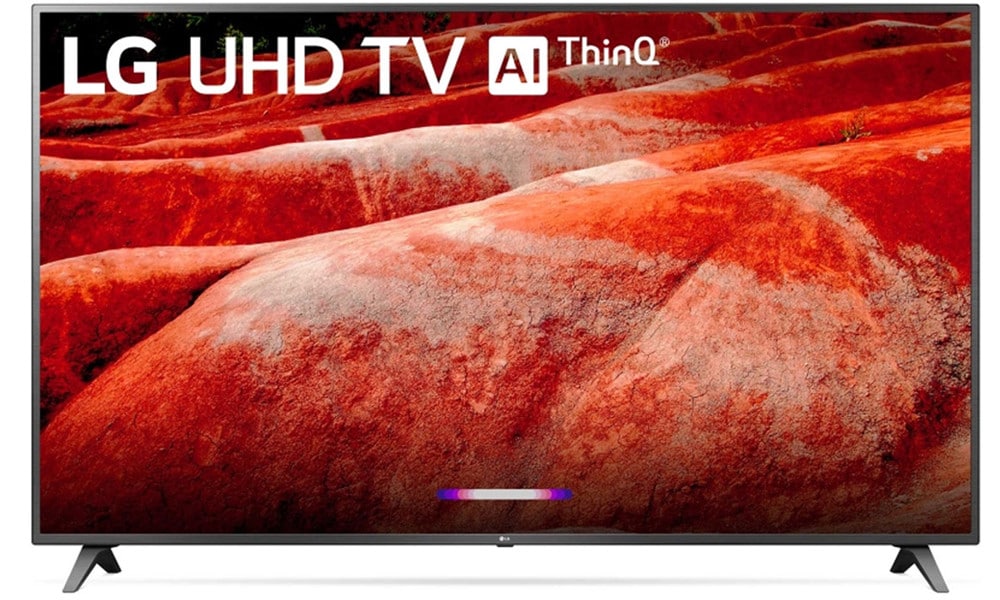 One thing that really excites me is when I have the opportunity to test drive an absolute mammoth of a television set. Today I get to share with you such an experience, because I am going to discuss a massive TV model produced by LG called the 82UM8070PUA.

As the name implies, this is an 82 inch screen that is so big you may have trouble visualizing what it looks like on your wall. It’s a 4K HDR Smart LED TV that has a lot more going on for it than just the size. Do you think this could be the television set for you? If you’re intrigued then let’s begin the LG 82UM8070PUA TV review.

While the LG 82UM8070PUA is considered a cheaper TV due to its product features and its size, the build quality was better than what I was initially expecting. The casing is made entirely out of metal rather than plastic, which makes the TV more durable. The thickness of the frame isn’t much of an issue but it could make wall-mounting a little more awkward than usual, as if the massive size already wouldn’t contribute to that.

The leg stands work well enough but they seem to be the same size as stands found on 50 or 60 inch screens. That means that there will be some wobbling if you need to move the TV to mess around with cables.

Overall, I found the build quality of the LG 82UM8070PUA to be pretty decent and I don’t expect anyone to have any major problems with it.

The LG 82UM8070PUA uses the WebOS Smart operating software, which is currently one of the best OS’s for Smart TVs. It has an excellent UI that is very easy to navigate. Loading up most apps like Youtube only takes two to three seconds and the speed and smoothness is great. The LG 82UM8070PUA also supports HDR for many of its apps including Youtube and Netflix.

WebOS supports a huge selection of apps, so while the TV is already pre-installed with the more popular and obvious choices, you can add just about anything you’d want on here. There is also a smartphone remote app for the LG 82UM8070PUA, but I found the standard remote control to be far easier to use.

As a Smart TV, the LG 82UM8070PUA works wonderfully and I experienced zero issues with it.

Let’s get the bad news out of the way first. The LG 82UM8070PUA was surprisingly disappointing when it came to HDR performance. It handles dark scenes decently but did a rather mediocre job when trying to display brightness in many games, films and TV shows. The viewing angles are also fairly bad – many colors simply faded out when I tried to watch content from wider angles.

Fortunately, the LG 82UM8070PUA does far more things well than it does poorly. As a 4K TV, all 8 million pixels are displayed clearly without any flaws. The color accuracy in general is pretty decent which is around what I expected for a TV in this price range. The LG 82UM8070PUA is also a great choice for people who watch a lot of TV in brightened rooms as it handles reflections pretty well too.

You should keep in mind that because the LG 82UM8070PUA is so massive, pixel density will take a hit if you use it at 1080p resolution or lower. The image will simply look a little blurry or washed out. It doesn’t look awful by any means but you should plan on using this screen in UHD as often as possible to get the most out of the LG 82UM8070PUA.

CHECK CURRENT PRICE ON AMAZON At the end of the day, I was very satisfied with the LG 82UM8070PUA. It has decent build quality, an excellent Smart TV OS and has far more pros than cons when it comes to image quality. While it isn’t the most high-end large screen TV on the market, it is much better than your average 4K Smart TV, and anyone who is even remotely attracted to its awe-inspiring size will surely be satisfied with it.
Related Topics:LGTV