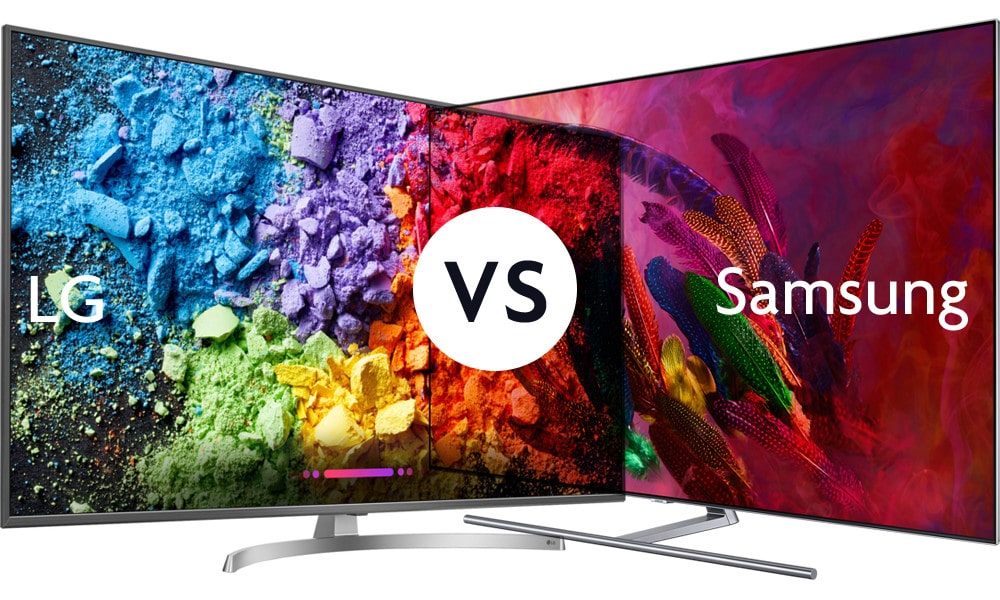 While there are many great budget companies out there that can really give you a lot of bang for your buck, it’s true that the absolute best TVs on the market are still being made by the same big-name companies. Two of said companies are, of course, LG and Samsung.

While both brands have developed a reputation for excellence over the many years they’ve been around, it’s not extremely obvious which one makes the superior television set. So read on as we figure out who wins in the battle of LG vs Samsung.

While neither of these brands are going to have the cheapest TVs on the market, they still offer many affordable models, so which one wins when it comes to pricing with LG vs Samsung?

When it comes to cheaper models, Samsung is actually offering the cheaper TV sets. Both LG and Samsung have affordable, bestselling 4K Smart TVs around 40 inches large. LG’s 43UM7300PUA is a little more expensive than Samsung’s UN43NU6900.

The story doesn’t seem to change much when we start looking at their most expensive models. Many of LG’s and Samsung’s 65 inch screens or larger come in a variety of prices. While there are some exceptions, LG’s sets typically tend to be slightly more expensive, though not by much.

While both brands are in very similar price ranges for most of their models, Samsung definitely comes out on top, even if only by a hair.

One of the most important aspects of a Smart TV’s ability to be, well, smart is what kind of OS it is using. LG and Samsung use very different operating software so it’s important to examine each of them to analyze their pros and cons.

LG TVs use the webOS which has some nice built-in conveniences like seamless integration of Google Assistant and Alexa. WebOS also has great support for a lot of different apps and has a very speedy search function that allows you to switch out of a live streaming app so you can quickly check on something else.

Samsung TVs use the Tizen OS which is also quite fast to use, but it unfortunately doesn’t have the best app support. Its search function can also be a little hit or miss, though on the whole it isn’t too bad.

At the end of the day, my choice goes to LG and their webOS. I love a good Smart TV that can support as many apps as possible and it’s always a bummer when some TVs just have limited compatibility.

There is no denying that both of these companies produce fantastic displays. One could make a very convincing argument that both LG and Samsung make some of the best looking television sets ever made. But who comes out on top when it comes to LG vs Samsung for display and picture quality?

For one thing, Samsung screens seem to be ahead when it comes to having brighter screens that portray better contrast. This is especially true when we are comparing the cheaper models of both brands with sets that only cost a few hundred dollars.

But on the other hand, LG seems to be one step ahead of Samsung for better display, especially when HDR is concerned. While their higher end sets are a bit more expensive, LG TVs not only use UHD but have a combination of Dolby Vision and HDR10. These elements combined produce an astonishingly vivid and realistic image, no matter whether you are watching a movie, a concert or using your TV for gaming.

The higher end LG models also tend to have much better viewing angles and gray uniformity. Additionally their models have considerably better sound quality from the built-in speakers. So while Samsung would be the better choice for cheaper models, I believe that LG’s incredible performance at the upper end of things makes them the victor for this category.

This was a fairly difficult match up for me to decide on. I have had a lot of respect for both LG and Samsung for many years. Their ability to create a wide array of great TV sets for so many different price ranges is truly impressive.

But there’s a reason why this article is called LG vs Samsung – someone has got to be crowned the winner. At the end of the day, I must say that I think LG is the winner of today’s TV battle.

Don’t get me completely wrong, though. There is no denying that Samsung makes exceptional television sets, especially when compared to other competitor brands. They undoubtedly make great budget models as well as some of the most stylish and technologically advanced high end models the market has ever seen. They are definitely great, but they just fall behind in one too many categories to be my favorite.

If you decide to go with a Samsung model then you’ll definitely be satisfied with your purchase. However, LG’s astonishing picture quality with state of the art HDR and a superior Smart TV OS really puts them ahead of the game, even if only by a bit.

Their models may be more expensive but only by a fraction most of the time. If anyone is genuinely curious about which brand they should go with, my honest opinion overall is going to be LG.

Thank you for reading and I hope you have learned a lot about the LG vs Samsung debate and have come to a decision for yourself. No matter which TV or brand you pick, I hope you enjoy it. If you still can’t decide, check out some of our other TV battle articles!