The Motorola MG7550 vs the NETGEAR Nighthawk C7000: Which Modem Router Should You Buy? 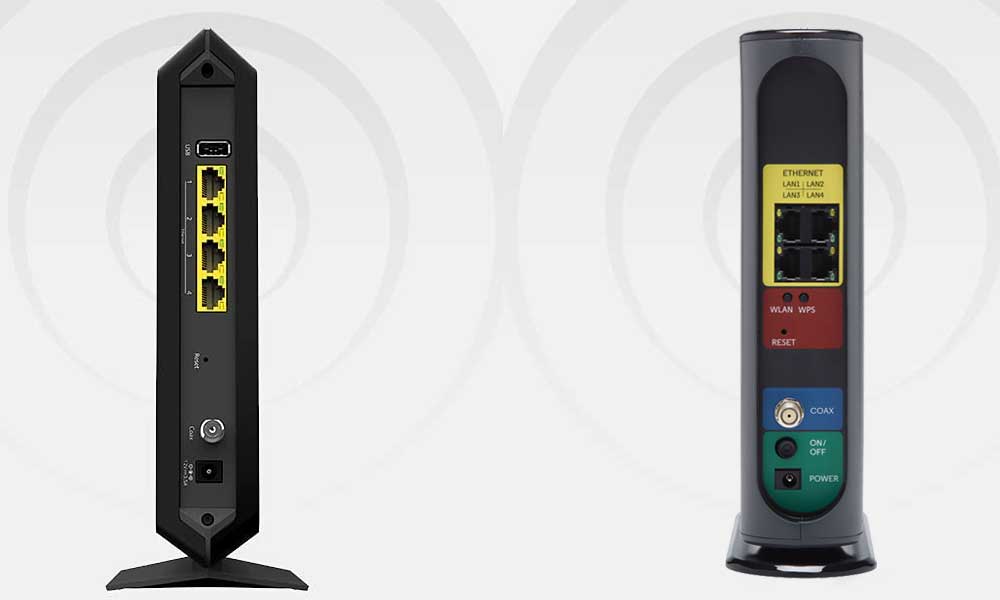 While everyone receives a modem from their ISP, not every free modem router is of high quality. This is because ISPs tend to just give you a tool that is not built out of the best quality components or that has the best capacity. As a result, your internet browsing experience may not be as smooth as desired. The solution? Get yourself a new modem router. But which one should you get?

Today we’re going to be doing an in-depth comparison between two modem routers that will hopefully save you money in the long-term and provide you a better browsing experience. The Motorola MG7550 and the NETGEAR Nighthawk C7000 are our choices today. While both seem like solid options, which one will be the best choice for you?

The MG7550 has a max download speed of 686 Mbps, which is quite impressive. The recommended internet plan is 375 Mbps at least. It uses 802.11ac wireless technology, dual-band technology, 3×3 antennas, 4 gigabit ethernet ports and weighs 2.6 pounds.

On the other side of the table, the Nighthawk C7000 has a max download speed of 400 Mbps and an identical recommended internet plan speed. IT also uses dual-band technology and sports 802.11 wireless technology. It is a little smaller and lighter than the MG7550, weighing about 1.6 pounds and is a couple inches shorter and thinner.

While both of these modem routers have their similarities when it comes to their specs, there is more to this than initially meets the eye.

Both the MG7550 and the C7000 are compatible with all internet service providers. NETGEAR and Motorola are major corporations so it should come as no surprise that their products will work with any ISP you can think of.

One thing that needs to be said is that both the MG7550 and the C7000 are both modem routers. This means that they possess the abilities of both cable modems and wi-fi routers simultaneously. With either one of these devices, you’ll be able to connect your home setup to the world wide web as one would with a modem, but you’ll also be able to connect all of your home personal devices at once, as one would do with a router.

It’s just as important to keep in mind that both the MG7550 and the C7000 are both modern day DOCSIS 3.0 modems. They are much faster than the previous generation of DOCSIS 2.0 modems, approximately 15 times faster. And because they are both dual-band routers, you’ll be able to use both 2.4Ghz and 5.0Ghz connections with them.

One of the great things about modem router combos is that they are easy to install. When you’re working with two separate devices, an individual router and an individual modem, you may have to deal with a lack of space due to cluttered wires and it takes longer to hook both of them up. But because these are all-in-one modem routers, installation is easier and faster.

The MG7550 and the C7000 may have a lot of important points in common, but it is their differences that truly matter when it comes to deciding which one is the winner.

For starters, the MG7550 has a higher maximum download speed. This may not matter if your internet plan doesn’t exceed 400Mbps but if it does then you will be better off with the Motorola modem router.

Higher download speeds also means a reduced chance of experiencing bottlenecking which can be very important for people who do a lot of high-quality downloading.

When it comes to the wired connection via LAN ports, I have to give it to the NETGEAR Nighthawk C7000. While both modem routers have four gigabit ethernet ports, the C7000 also has a USB 2.0 port which really comes in handy for connecting extra devices such as printers, copy machines or external hard drives.

As for security protocols, both modem routers have respectable WPA and WPA2 protocols. But the C7000 has double firewall protection, including SPI and NAT, which makes it better than the Motorola.

The MG7550 uses a channel bonding setting of 16×4, which means 16 downstream channels and four upstream channels are in effect. While this is good, the NETGEAR Nighthawk C7000 has a channel bond configuration of 24×8, which is much more impressive. In plain language, this means the Nighthawk C7000 will have a more stabilized internet connection during heavy traffic timeframes.

While this was a tough modem router comparison as both entries have a lot to offer, I’m going to have to say that the NETGEAR Nighthawk C7000 is today’s winner. While the Motorola MG7550 has some impressive specifications and is a little bit more affordable, the Nighthawk C7000 is able to withstand some seriously impressive high traffic moments and still keep a strong connection. It also has better firewall protection and one can never underestimate how much a USB port can come in handy.

I can’t blame you if you’re still on the fence, as I think the Nighthawk C7000 is only slightly better. If you’re the type who really doesn’t like the hassle of ethernet cables and would rather exclusively use wireless connections, the Motorola MG7550 with its amplified antenna signal range will definitely be the more appealing choice in your situation.

However, for most people, I am confident that the Nighthawk C7000 will offer the versatility and the power that one wants out of a modem router.