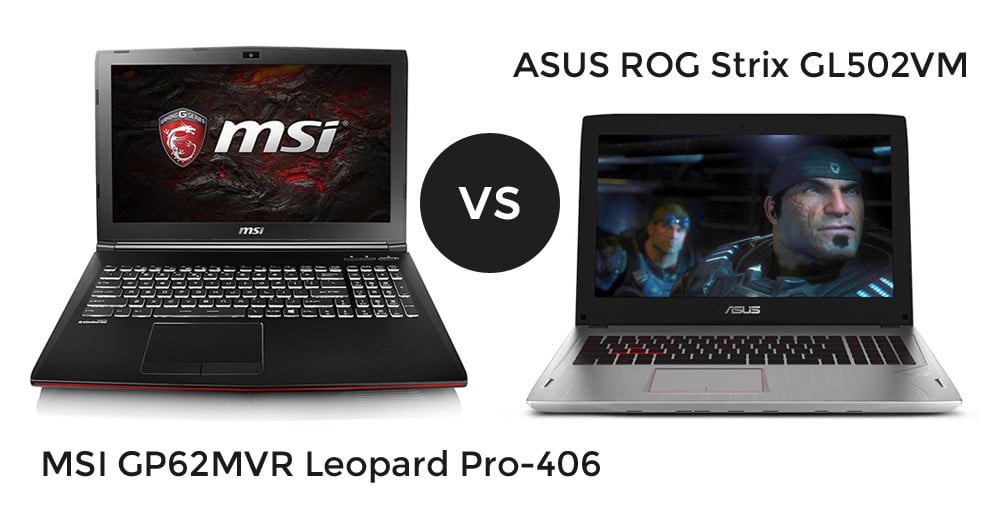 MSI’s GP62MVR Leopard Pro-406 and ASUS’s ROG Strix GL502VM are both prominent high performance gaming laptops that are VR-Ready. They also fall within the same price range, with the GP62MVR priced at around $1200 and the ROG Strix GL502VM only $100 more. So which one should you go for? In this review, we’ll see how these two high grade laptops compare.

The MSI GP62MVR Leopard Pro-406 features a 15.6” screen, using a well-lit eDP panel. It provides viewing angles up to 170 degrees. The laptop’s Intel processor is a premium quad-core with the ability to run eight threads at a time. The Leopard comes with 16GB of RAM and runs at a frequency of 2400 MHz, which is faster than the usual 2133 MHz.

The NVidia GTX 1060 is the entry-level model of the new NVidia mobile GPUs, but still performs well. However, the GPU only includes 3GB of dedicated RAM (6GB is standard on all GTX 1060 graphics cards). The laptop is also ready to launch any VR-based application.

The 256GB SSD powering the laptop’s storage capabilities promises speeds up to 3300MB/s, using Xboost technology. There’s also an empty 2.5” SATA drive bay which can be used to add an extra SSD if needed.

The HDMI and display ports can be used to connect two external monitors, which can be useful for immersive gaming, a more productive workspace, or multitasking. The Killer E2500 ethernet port greatly enhances Wi-Fi and LAN connections. The laptop also offers an array of other ports – your connectivity capabilities are only limited by your own imagination!

The other features of the Leopard make it even sweeter. The 4.1 speaker system offers great sound, and is powered by Nahimic 2. The Leopard also features Audio Boost Technology, which amplifies the audio over headsets. The keyboard is designed and provided by SteelSeries, and has anti-ghosting features and silver lining backlighting. The laptop utilizes Cooler Boost 4, which uses six heat-pipes cooled by two cooling fans.

Physically, the MSI GP62MVR Leopard Pro-406 has an attractive and durable design, with an aluminum chassis and PVC material. However, a review by Tom’s Hardware found the hinges and underside vents to be quite flimsy. But for most uses, it is adequately sturdy.

The ASUS ROG Strix GL502VM’s 15.6” screen has a wide-view, anti-glare panel, and offers viewing angles up to 178 degrees. The panel covers 98% of Adobe’s RGB color space. The Strix features a 6th generation Intel quad-core processor. It comes with 8GB of RAM and runs at the standard frequency of 2133MHz, but is expandable up to 16GB.

The Strix features the NVidia GTX 1060 GPU, and includes 3GB of RAM, but can be customized for up to 6GB. Like the Leopard, the Strix also has a 256GB SSD, but it lacks the Leopard’s empty SATA drive bay for additional storage.

The Strix boasts plenty of connectivity, including 3 USB 3.0 ports, an HDMI port, a Mini DisplayPort, and the coveted USB Type-C connector. Headphone and microphone connectivity share the same port.

During Engadget’s standard battery test, the Strix’s battery was found to last about three hours, which is shorter than the Leopard’s five-hour battery life.

The laptop’s keyboard features well-spaced keys, a dark red backlight, a dedicated button for calling up ROG Gaming Center software, and anti-ghosting support. Engadget’s review found the audio to be average, except for one trick: the speakers are located on either side of the touchpad, instead of flanking the keyboard. This enhances the sound, due to the speakers simply being closer to the user. The Strix also includes Hyper Cool Duo-Copper temperature reduction technology, featuring designated heat pipes and dual fans for cooling both the GPU and the CPU respectively.

The ASUS ROG Strix GL502VM features a plastic chassis with plenty of bright orange accents, which Engadget found to be a bit annoying. However, it’s thin, lightweight, and portable.

The MSI GP62MVR Leopard Pro-406 and ASUS ROG Strix GL502VM share some things in common, but there are key differences. The Leopard has more standard memory and runs faster, but the Strix has more dedicated RAM in its GPU. They both have similar storage capabilities, but the Leopard has the SATA drive bay for extra storage. The Strix has an extra USB 3.0 port, but it also shares one port for both headphones and microphones (whereas the Leopard has one port dedicated to each of those purposes). The Leopard has a newer Intel processor (7th generation vs. 6th generation), and runs at higher base and turbo speeds. The Leopard’s battery lasts a few hours longer than the Strix’s. Physically, the Strix is a bit larger, and seems both sturdier and more lightweight.

If your concern is durability or portability, the ASUS ROG Strix GL502VM is the clear choice. However, the MSI GP62MVR Leopard Pro-406 outshines it in terms of speed, memory and storage, and battery life.