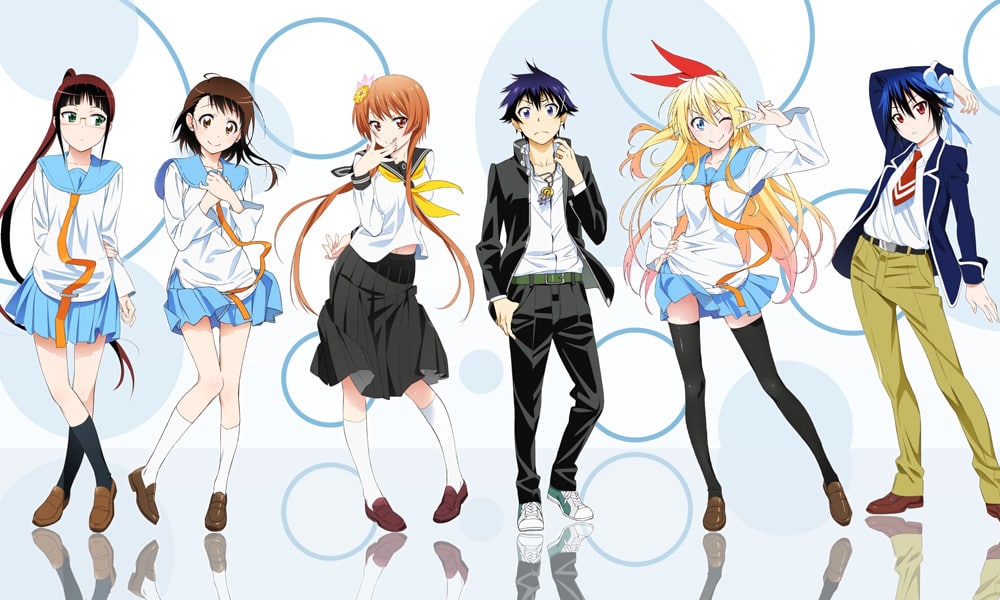 What do you get when the son and daughter of two rival yakuza clans pair up their children in an arranged relationship to help quell the tension between their gangs? The answer is that you get the romantic comedy anime known as Nisekoi.

Like many successful animes, Nisekoi originally began as a manga series that is pretty long running. After multiple volumes, the manga series reached its conclusion and was finally translated to the small screen and has had two successful seasons, with fans eagerly awaiting news on a third season.

It’s already been a few years since season 2 reached its conclusion, so if you need a recap on Nisekoi, or are curious about what exactly is going on in this show then check out our recaps below as well as what we have to say about Nisekoi season 3.

The original manga of Nisekoi was written and drawn by artist Naoshi Komi, who comes from the small town of Tsuno, Japan. Nisekoi is by far his most popular work but he has published many other series, most of them appearing in popular manga serializations such as Weekly Shonen Jump.

Niseoki was originally meant to be a one-off manga released in 2011 but was soon picked up to become heavily serialized the following year. To this day, 25 volumes of Nisekoi have been published in both Japanese and English, with the final volume coming out in late 2016. It only took a couple more years before Nisekoi was successfully adapted to television in 2014.

While there are several characters, Nisekoi primarily focuses on the awkwardly funny love triangle between Raku Ichijo, Chitoge Kirisaki and Kosaki Onodera. Raku and Chitoge are both the children of two different rival yakuza gangs, the Shiei-Gumi and the Beehive gang respectively. In order to try and stop tensions from escalating into a full out gang war, the gang bosses decide to pair up their kids in a fake relationship to try and instill peace between the gangs. However, this idea is not well received by Raku or Chitoge.

Raku and Chitoge must pretend to be in a romantic relationship for three years and their inability to get along with each other well is the source of much of the anime’s comedy. As the fake couple go on many pretend dates, they often get on each other’s nerves to the point of despising each other.

To make things more complicated, Raku is not in love with Chitoge but with another girl named Kosaki. Luckily for Raku, Kosaki also likes him back but because they both keep their true feelings secret, neither are aware that they like each other back.

Over the course of the first season the relationship between Chitoge and Raku evolves rapidly. During a school play that occurs in the season finale, Chitoge develops feelings for Raku and ends up falling in love with him.

Season 2 of Nisekoi explores the relationship of Raku and Chitoge further as they both continue to become more honest with each other. Season 2 also began introducing new characters such as Kosak’is younger sister Haru, as well as Paula Mccoy the hitman, a former member of the Beehive Gang.

The central question that drove the plot of season 1 was which girl would Raku end up falling in love with, be that Chitoge, Kosaki or any other of the many girls introduced throughout the show that place Raku in an escalating series of intense and awkward situations. As season 2 progresses and finally reaches its end, that question still remains unanswered.

Will there be a Nisekoi Season 3?

It should be important to note that the first season of Nisekoi was based off of the manga. In terms of chapters, Nisekoi season 1 spanned from chapter 1 to chapter 74, whereas the second season of Nisekoi was based on chapters 75 to 200. As of now there are a total of 229 chapters in the Nisekoi manga, with chapter 229 being the end of volume 25.

As far as we can tell, both seasons of the Nisekoi anime were adaptations of dozens of manga chapters, but with there being only 29 chapters left it seems as though there isn’t really enough material for there to be 20 episodes.

As far as anyone knows, the studio responsible for making the Nisekoi anime, Shaft, has given no word on the future of Nisekoi. Perhaps the conclusion will come in the form of a couple of OVAs as both seasons were also followed by full-length movies.

It has admittedly been quite some time since season 2 reached its conclusion, so fans of course are wondering how the series is going to wrap up the complex web of relationships that has evolved between all of the different characters. The good news is that the studio has not officially made any announcements about the cancellation of Nisekoi, but the bad news is that they haven’t made any official announcements of its continuation either.

Therefore, the best we can say is that Nisekoi season 3 is coming, we just don’t know when that will be. Many fans online have been speculating that 2020 is the year when Nisekoi will make its return and wrap up its final season, but since there is no evidence to suggest that, this is unfortunately just some wishful thinking.

All we can say with certainty is that no one should lose hope about the future of the Nisekoi anime. With the anime so close to catching up with the manga it would make no sense to just stop here and leave things inconclusive for the anime adaptation.

There are many theories and fan speculations about how Nisekoi season 3 will go, and while we still don’t have a definitive answer to any of our questions, it is at least still fun to try and imagine how the anime will progress. Hopefully if and when Nisekoi season 3 does appear it will be just as wacky and thrilling as we imagined it to be.