Prison School Overview and What We Know About Season 2 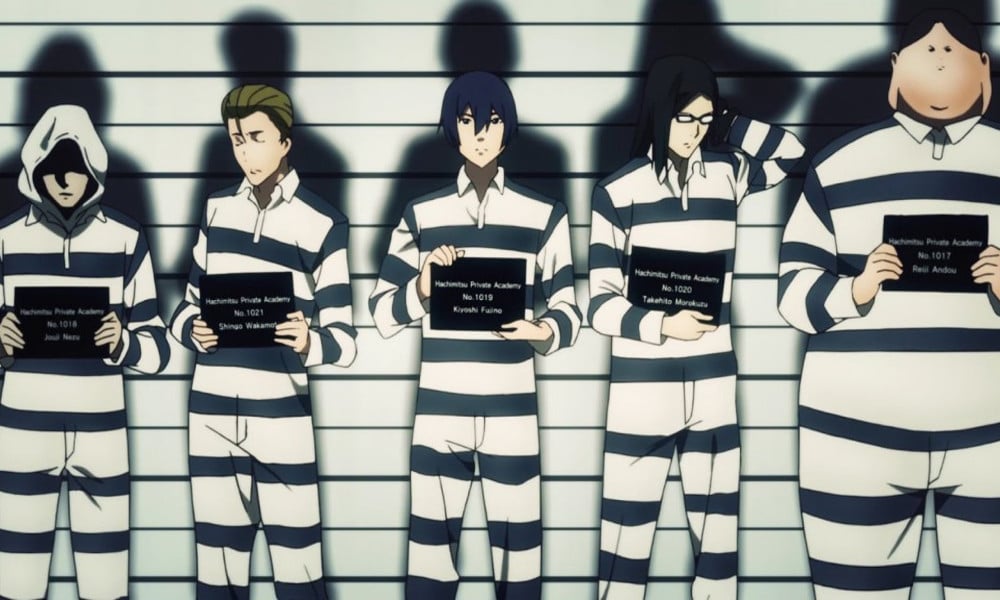 Many manga and anime series try to come up with unique takes on the classic formula of teenage students getting into high school misadventures. If this is your cup of tea then you will either be interested in or have already seen the dark and twisted show that is Prison School.

For anyone looking for a summarizing overview of this anime, all of its related media and what we know about the second season then by all means, read on!

The Premise of Prison School

As the name of the show implies, Prison School is about a high school that has some extremely strict rules regarding the punishment of its students. The name of the school is Hachimitsu Academy, and it’s located in Tokyo, Japan in the story. The first interesting thing about this school is that it is actually an all female academy. However the academy has recently decided to allow boys to register for classes.

One of these boys is our protagonist – Kiyoshi Fujino. He and four of his best friends are all allowed to be admitted into Hachimitsu Academy: Takehito Gakuto Morokuzu, Shingo Wakamoto, Jouji Joe Nezu, and Reiji Andre Andou. However the twist, which all five boys soon realize, is that they are in fact the only boys that have been allowed into the school, meaning that there are five of them and 1,000 girl students.

After getting into trouble in the school’s bathroom by spying on some girls, all five boys are caught and are sent to punishment. The school staff ends up giving them an ultimatum: either be expelled or spend one entire month in the prison block of the school. The boys choose the latter and thus begins the adventures of Prison School.

The History of Prison School

As you probably have already guessed, Prison School didn’t originally start out as an anime like many other anime TV series. Prison School originally began as a manga series created, written and illustrated by Akira Hiramoto. It was first published in Weekly Young Magazine in 2011 and is still ongoing as of now after a whopping total of 28 volumes, leaving a lot of source material available for future episodes or seasons of the anime series.

Additional to the original manga is a live action television drama that aired in 2015 that lasted 9 episodes.

Season 1 of Prison School begins with Kiyoshi and his four friends getting accepted into the Hachimitsu Academy. After being overwhelmed by the sheer amount of girl students in this school, they can’t help themselves and end up spying on some of them as they are bathing in the girls’ bathroom. After they are caught they are quickly sent to the prison block.

Season 1 explores a lot of the relationships that the main five boys go through. For example, protagonist Kiyoshi ends up falling for Chiyo Kurihara and Shingo ends up developing a crush for Anzu Yokoyama.

The five boys all have very distinct personalities. Kiyoshi is shown to be very good at improvising during an emergency, and Takehito is extremely intelligent, despite being one of the most odd and even perverted characters in the whole show.

While the anime definitely has a diverse cast of memorable personalities, arguably one of the show’s biggest draws is the five boys plotting their escape from prison. Many of the series most exciting moments are spawned out of this idea. We won’t go into spoilers but Prison School season 1 excelled at portraying the friendship of the boys and their determination to break out of jail.

What We Know About Prison School Season 2

Let’s start with the facts. Prison School season 1 originally aired in July of 2015 and finished in September of that same year. That means that it has been over four years since the show was on the air. This is a rather long time for an anime to be on hiatus, especially considering that Prison School season 1 was only 12 episodes long.

The closest thing we have to any news about Prison School season 2 is a tweet that was posted by Tsutomu Mizushima, the director of the Prison School anime. After being asked about a second season, his response was (translated from Japanese into English): “I don’t know about a 2nd season. I want to do it, but…”

This response probably comes as a downer to fans, and understandably so. While Mizushima didn’t officially confirm or deny anything, the lack of confidence in his message seems to at least be implying that Prison School season 2 is by no means a priority for the animation studio.

What You Can Do For Prison School Season 2

If the handful of episodes of Prison School has left you wanting more, there are luckily a few things you can do to quench your thirst. This answer was probably seen a mile away from some people but the manga is still available. Not only is it a bestseller and award winning series but is still ongoing to this day.

Another thing you can do to show your support for the anime itself is to buy the Blu-ray edition of Prison School season 1. While the manga sales are still very good, the same unfortunately cannot be said about the anime. You can either buy it for yourself and have the limited edition bonus features or you can give it to a friend as a gift that you think will enjoy the show.

At the end of the day, the simple truth is that if you want Prison School season 2 to eventually appear, you have to speak with the language of money and let the production and animation studios hear you loud and clear—aka, buy the Blu-rays and mangas!