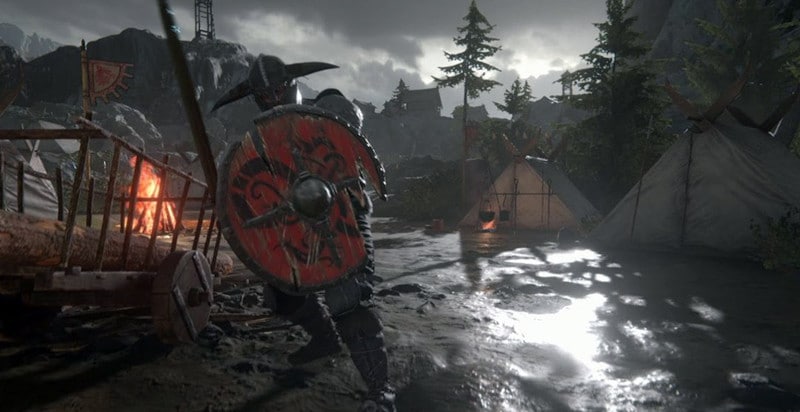 These days when we think of open-world games we tend to think of the AAA titans: The Witcher 3, Skyrim, Metal Gear Solid V, The Legend of Zelda: Breath of the Wild. As great as all these games are we ought to take a step back and recognize some of the underrated titles out there. What could be one of the best open-world games, which isn’t even out yet, is The Outsiders: Project Wight.

You may not even remember that this project still exists. One couldn’t blame you. It has been nearly two years since we last received any word or footage about this daring and original project. That does not mean that all hope is lost as this Viking-based adventure is still underway. We believe that a game this unique deserves a recap of its features and themes. Read on to learn all that we know about the ambitious first game of studio The Outsiders: Project Wight.

What is Project Wight?

There are two common definitions for the word wight: 1. “a person of a specified kind, especially one regarded as unfortunate.” 2. a spirit, ghost, or other supernatural being.”

Project Wight in simple terms is meant to be an action-oriented open world game. The Outsiders has confirmed that it will lean heavily on role playing game elements as well as elements of horror. What separates Project Wight from many other Viking games is that you are not the Viking – you are the monster, the wight itself.

Other than this, we unfortunately don’t know very much about the game or the gameplay itself. A trailer was released in November of 2016 which you can view here. It’s only three minutes long but does a good job of establishing the basis of the game’s premise.

David Goldferb, one of the lead developers, states in the opening of the sneak peak trailer that Project Wight takes place in an alternate timeline of Viking history. This is a land where humans exterminated a species of still unnamed monstrous entities. He notes in the beginning of the trailer that young members of these creatures are agile. They are good at climbing and crawling, implying that Project Wight will also feature stealth elements.

As you are presumably the last of your kind, you will be often outnumbered. As your character matures and levels up he would certainly be more powerful than your average human viking. We still suspect that strategic elements will be utilized to not only overpower but out think your opponents, similarly to how stealth was utilized in the Batman Arkham series.

Who are the Developers?

The Outsiders is a relatively small and new game studio founded in early 2015. Leading the studio is Ben Cousins, formerly a member of DICE, a subset of EA games in Sweden. David Goldferb is the director and lead developer of Project Wight. Like DICE, The Outsiders is stationed in Stockholm, Sweden.

Part of The Outsiders mission statement is to address a gap in modern day game development. They want to hit the middle road so to speak regarding budget. Many games these days are either AAA titles with budgets in the tens of millions of dollars or small indie projects costing tens or hundreds of thousands of dollars. Part of their goal with Project Wight is to hit the sweet spot that lies in the middle ground: a game that costs only a few million dollars.

The Themes and Inspiration of Project Wight

As one might expect from a Viking game Project Wight will take influence from Norse themes and mythology. More precisely is the famous epic tale of Beowulf.

Goldferb has gone on record to state that this tale is one of Project Wight’s biggest influences and is the foundation for how both the story and the game itself will unfold. Beowulf is the titular heroic warrior of the tale who shares the stage with its three main antagonists: Grendel, Grendel’s mother and the Dragon.

Goldferb states, “Most of my life has been spent feeling like I don’t understand a lot of perspectives, except that I always side with the ‘other’. When I read Grendel, it was affecting to me personally and I thought I’d love to do something with it one day.”

This may seem brief but we can extract a lot from these few words. Project Wight is going deeper than just being a mindless and senseless power trip of a violent game. There are specific and calculated reasons why humanity is the enemy.

Vikings are often retroactively portrayed in a positive light: strong, fearless, heroic and adventurous. Unfortunately the truth is not so pretty. Many of them gladly partook in raids and abominable pillaging of unsuspecting innocent villages. They are a great outlet to portray the negative side of human potential. This is why Project Wight forces us to play as a monster – it takes one to know one.

The Future of Project Wight

As of now we still don’t have a release date for the project. It’s been nearly two years since the trailer was released and one can only speculate as to how much has changed. It’s a shame that the game couldn’t be showcased at this year’s E3, so we can only remain ever more patient.

Project Wight is an ambitious project loaded with potential and should remain at the top of people’s radar of upcoming releases. If we’re lucky we’ll be able to explore the land of the wight in sometime in 2019.