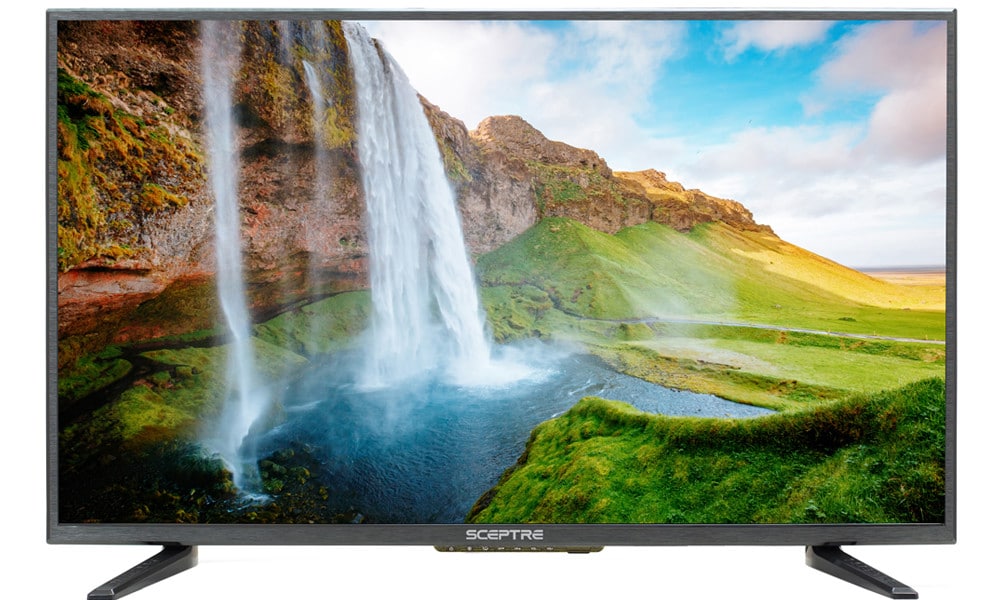 Instead of gushing about yet another 4K HDR Smart TV today, I decided now was a good time to talk about a mid-size yet very cheap television set that would barely put a dent in your wallet. I’m talking about the Sceptre X322BV-SR, a 32 inch TV that outputs a resolution of 720p.

While most people would not want to use a TV like this as their main set, it could function perfectly as a secondary screen for the bedroom rather than your living room or main home theater. Can the Sceptre 32” deliver on this request? Let’s find out now!

The first thing I noticed about the Sceptre 32” was how thick it was. I wasn’t expecting the thinnest TV ever with such a low price point but it isn’t the most subtle 32 inch TV ever made either. Luckily, it is pretty lightweight, weighing only about a dozen pounds or so.

The leg stands do a good job of keeping the TV stable. There is very little wobbling, so it is pretty easy to position this TV just about anywhere you’d want.

The cable ports are all neatly organized alongside colorful labels that tell you precisely where the HDMI or the digital optical plugins are, which was a nice touch I wish more TVs would have.

The casing is of course made out of pretty cheap plastic but any TV that is this cheap is going to come with plastic instead of metal.

Overall, the build quality is perfectly suitable for a television set in this price range and did not cause any major issues during my use.

Because the Sceptre 32 inch isn’t a Smart TV, you can’t expect to get too much functionality out of it. And because it’s a very cheap TV there probably isn’t going to be much else you can even do on it besides watch films and TV shows.

I was hoping that perhaps the Sceptre 32 inch would be a solid choice as a gaming screen but unfortunately that idea did not pan out. The input lag on this set is a little too much and there is no “gaming mode” setting like with other TVs to improve the latency.

This TV also has some pretty mediocre sound quality. I am aware that most TVs don’t have the best built-in sound quality in the first place, but the bass and human voices sound a little too faded on this one.

The Sceptre 32” does have a USB port in case you want to view photos or recordings on it, but beyond that there really isn’t anything else you can do besides watch content.

Some would say that 720p resolution is on its way out, as the standards have now become at least 1080p and 4K. This may be true but there’s no harm in using a lower res TV as a backup, or as a TV for the bedroom or even for something to take with you on a camping trip. The image quality of the Sceptre 32” is good enough to fulfill these purposes.

The Sceptre 32” is not the best TV ever when it comes to viewing angles, motion blur with fast paced scenes or displaying bright scenes properly.

However, it is a pretty solid TV screen for color accuracy, contrast ratios and handling reflections in bright rooms.

The Sceptre 32” delivers a reasonable picture quality that shouldn’t muddy or blurry any important images, and is somewhat impressive when you take into account the asking price.

CHECK CURRENT PRICE ON AMAZON While I wouldn’t recommend this TV has your main source of watching entertainment, including for gaming, I do think many people could benefit from buying the Sceptre 32” for a number of reasons. If you have a teenager who wants his or her own TV, or as a TV to bring around on trips, this is a decent option. If you ever felt like you need a spare TV for any reason, the Sceptre 32” would be a good, affordable choice.
Related Topics:TV