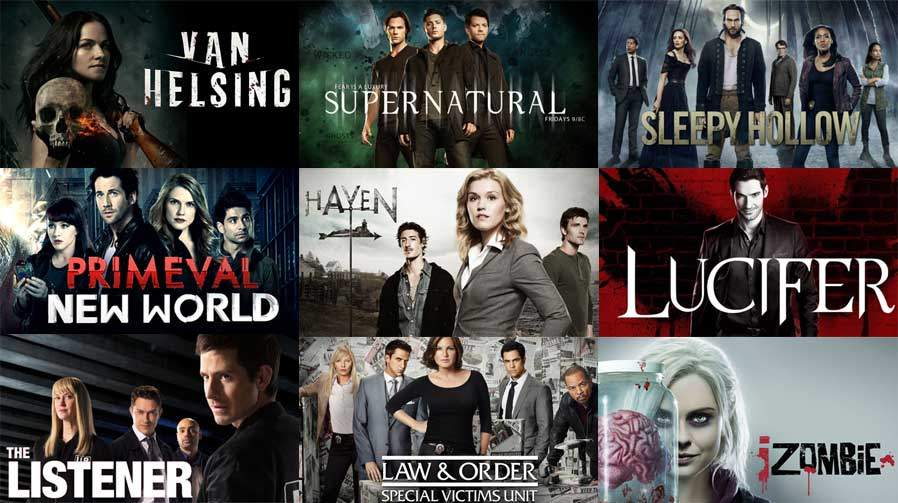 Grimm has become one of the most successful police dramas ever made. The original series aired on October 28, 2011, and was such a smash hit that there would be a total of 123 episodes made.

The sixth season finished on March 31st, 2017, and left a huge fan base wanting more. Rumors of a spin-off show featuring some of the original Grimm cast have not yet borne fruit. So what option do fans have but to look elsewhere?

To help you get over your Grimm addiction, here are the best Grimm-like shows out there.

The resurgence of mass interest in dark fairytales started at the movies. A string of huge commercial successes started back in the 1990’s and have continued ever since. Films like Edward Scissorhands and Sleepy Hollow proved that there was plenty of thirst for this genre. This caused TV networks to take notice.

Sleepy Hollow the TV series was aired back in September 2013. Like its film counterpart, it is a supernatural drama series that takes place in the small town of Sleepy Hollow, New York.

Based on the tale “The Legend of Sleepy Hollow” by Washington Irving, the story follows Ichabod Crane, a double agent, who beheads a Horseman back in 1781. Crane awakes in 2013, where he learns that the Headless Horseman is reaping havoc. He teams up with police officer Lt. Abigail Mills to try to end the terror.

Sleepy Hollow managed to rack up a total of 62 episodes over 4 series before it was canceled in May 2017. Its detective and supernatural elements make it much like Grimm.

The show was officially cancelled on May 9th, 2017.

The Law & Order franchise is a gold mine if you have not yet discovered it. The original Law & Order TV series was aired way back in 1990 and featured an impressive 20 episodes. Since then, Law & Order has given birth to a number of offshoot TV series that either feature characters or similar themes.

Some of the offshoot series include Special Victims Unit, Criminal Intent, Trial by Jury, LA, True Crime, and Hate Crimes. To date, the original series and its crossover shows total more than 1,000 hours of viewing time. That’s enough to keep your Grimm addiction at bay for years!

All are part of the crime investigation genre, though not always police investigation focused. Law & Order: Special Victims Unit, for example, focuses on solving sexually motivated crimes, while Law & Order: Trial by Jury deals with the legal prosecution of suspects.

If you like the detective/investigation genre then there will be a Law & Order series or spin-off season for you.

Haven is another American supernatural drama television series. It was based on the novel The Colorado Kid by Stephen King. It follows a series of strange events that occur in the made up town of Haven, Maine.

The series premiered in July 2010, and ran until December 2015. During its 5 season run, it racked up an impressive 78 episodes. Each episode is one hour long, meaning there is plenty of viewing pleasure to be had for all those who get hooked.

After FBI Agent Audrey Parker is sent to the fictional town of Haven, she gets caught up in a series of supernatural events that are known locally as “The Troubles”.

Gradually as the episodes progress, Parker comes to realize that she is inextricably linked to the events through her mother. She is forced to try to work out who she is and why she is so important to the drk events unfolding.

The Listener is another Sleepy Hollow like supernatural drama TV series. It was created by Michael Amo and premiered in June 2009. It ran for 5 years, during which it aired 65 episodes over its 5 series. The show ended in August 2014.

The series follows paramedic Toby Logan, who discovers that he has telepathic powers. Because of his newfound abilities, Toby quickly finds himself working with law enforcement to track down perpetrators of the victims that he is sent to help.

Primeval: New World is a spin-off of the successful British series Primeval. While it only ran for one season, its 13 episodes still managed to gain a cult following.

The series follows a Canadian Special Projects Group that has to deal with incidents where animals travel through time and end up in our present day. The series was a little too niche for mainstream acceptance but was really good viewing for those that clicked with it.

iZombie was first premiered back in March 2015. The series is based on a comic book by the same name. To date, there has been four full series, the last of which was aired in early 2018. The studio responsible for iZombie announced that the final series will be aired starting in May 2019, so if you need to make sure you have seen the previous four if you want to watch them with the rest of us.

As the title suggests, the series follows a woman who has turned into a zombie. After finding herself as the newly undead, Olivia abandons her fiancé and tries to come to terms with her new appetite for human brains.

To cope with this, Olivia gets a job in a morgue so that she can feast on the brains of the dead rather than having to kill people. She quickly discovers that when she eats a person’s brain, she takes on some of their personality traits and memories. This helps Olivia to track down the victim’s killers.

Lucifer premiered on January 25th, 2016. It is a detective drama TV series that is soon to be into its fourth series. Netflix has recently announced a 10 episode 4th series that will be released sometime this year. This will bring the total number of episodes up to 67.

The devil, otherwise known as Lucifer Morningstar, is unhappy. He decides that he will renounce his role as the Lord of Hell and head to Los Angeles. He finds himself involved in a murder case, and after helping Detective Chloe Decker to solve the case, he is offered a job asa consultant with the LAPD.

Van Helsing was recently renewed for its 4th season. This fantasy horror television series first premiered in September 2016, and is very similar to Grimm.

The series is set in the not too distant future. Unfortunately, for humanity, vampires have taken control of the world and are now threatening to make humans extinct.

Stepping up to save the day is a descendant of Abraham Van Helsing, Vanessa, who discovers that she is our last chance at survival. She discovers that her blood has the ability to change vampires back into humans. The question is, can she somehow survive long enough to help save the day?

Supernatural is now the most successful fantasy-based TV show. It is into its 14th season, meaning that there are now 297 episodes for you to get your teeth into. It is watched by around 2 million viewers per episode and is certain to be around for many years to come.

It follows two brothers who are involved in hunting down supernatural beings such as ghosts, demons, monsters, etc. It is a cross between the Insidious movie franchise and The X Files. Key to its success is the constantly changing supernatural beings that the brothers find themselves up against.

If you like Grimm, you will find yourself a Supernatural fan in no time.

Once Upon A Time

Once Upon a Time was first aired back in October 2011, and there has been a new series every year since. Another series that finds itself set in the clearly spooky state of Maine, it ended last year.

The shows influences range from Alice in Wonderland to the Grimm tales. Many of the characters are straight out of fairytales such as Snow White and Sleeping Beauty. It is a fantastic series that will definitely take the edge off your Grimm addiction.