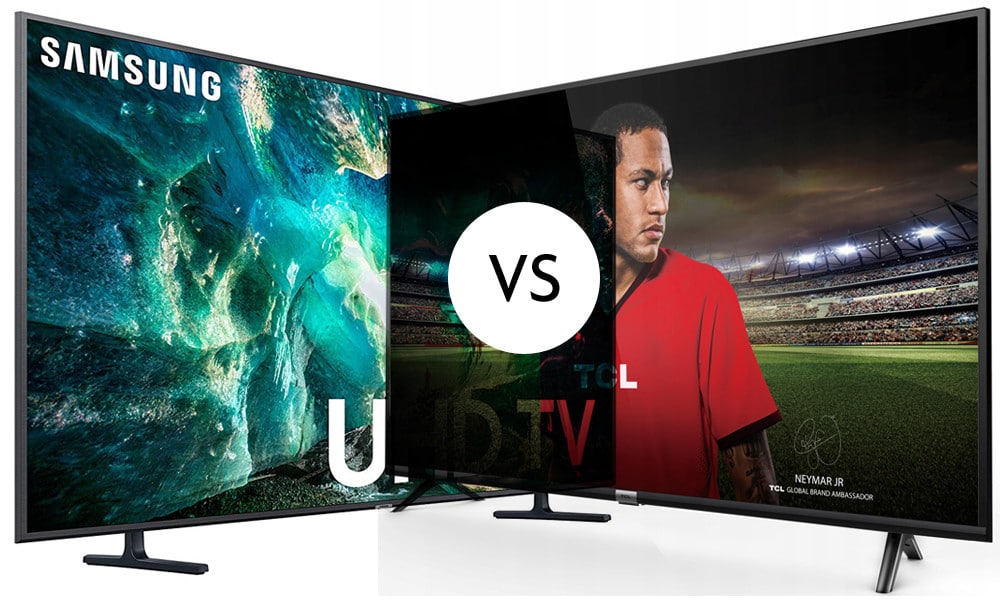 With so many high quality options on the market driving the prices down, now is the perfect time to purchase a new TV. But how do you pick the perfect TV to fit your needs? Read on to learn more of the ins and outs of two leaders of the TV game, Samsung and TCL.

Samsung is currently seen as the “de facto” leader in electronics in terms of market share, longevity, and innovation. Samsung specializes in the production of a wide variety of consumer and industry electronics, including appliances, digital media devices, semiconductors, memory chips, and integrated systems. It has become one of the most-recognizable names in technology and produces about a fifth of South Korea’s total export.

Meanwhile, TCL lacks the longevity and market recognition of Samsung. TCL, an electronics company based in China, has not been around for as long as Samsung, but in recent years has grown to one of the larger TV manufacturers in the world. In fact, some recent statistics place TCL in second or third place of the number of TVs shipped globally (similar in size to LG, but less than Samsung) and it’s earned its place in the big leagues.

When considering picture quality of a TV, generally, the higher up the series or class it is, the better picture quality it has. That being said, TCL has a reputation asbeing a budget brand and most of the company’s line generally has an average picture quality.

With TVs, there is always a cost versus performance question to consider, as cheaper televisions almost inevitably mean a drop in quality from their more premium counterparts. Although TCL offers several higher end and higher price options that provide a higher picture quality, the overall winner in the category is Samsung.

Samsung TVs normally do a solid job with upscaling (turning HD into 4K), and usually perform better their competitors when handling scenes with fast motion. They offer a technology called HDR10+ that makes colors look extremely vivid and their input lag is typically low, making it a great option for gamers as well.

Generally, Samsung TVs won’t be the very best for a specific usage. They instead tend to be very versatile TVs that will do well in a wide variety of uses with a wide amount of smart and streaming options.For example, Samsung was the first major TV manufacturer to offer new gaming technologies, such asFreeSync and Game Low Latency Interpolation.

Meanwhile, most of TCLs mid-range US sets use the Roku TV smart platform, which offers a well thought-out interface with plenty of the most popular streaming apps like Netflix, Hulu, and Amazon Prime Video. Because TCL has chosen to license the software and technology from Roku, this makes TCL a winner in this category.

Flexibility of the Brand

One of the biggest strength of Samsung is that the company puts out a massive number of TVs each year. There’s a huge range of TVs spanning affordable mid-range sets like the NU7100 to the Quantum dot (QLED) models and luxury TVs.

Although TCL now ships televisions all over the world, with a strong presence in the US, Europe, Australia, and South East Asia, they still trail Samsung in their range of offerings, making Samsung the winner in this category.

Value for the Money

Samsung TVs are generally more expensive than those made by their rivals, and aren’t always long-lived. Meanwhile, TCL’s main advantage in the TV market is its aggressive pricing. TCL manufactures televisions at a large scale and in turn passmuch of those savings to consumers in anattempt win over consumers worldwide.

So if you’re looking for an affordable television that offers a lot for the price, TCL will often be a good bet. Therefore, TCL is the winner in this category.

Because Samsung and TCL both boast a strong showing in all aforementioned categories, a head to head competition of a midrange TV from both companies can help you determine the TV to meet your needs. For this competition, Samsung UA55KU6000K 55 inch LED 4K TV and TCL L55P1US 55 inch LED 4K TV, comparably priced options are compared to help with your TV shopping quest.

These comparable models feature very similar features, resulting in a bottom line of their price difference. With the Samsung, you get slightly more features, but with a slightly higher price point. Thus, the takeaway is simply that you get what you pay for.

Samsung TVs boast more features and a higher price point, while their counterpart TCL is an impressive up and comer that features TVs attractive enough to rival their larger competitors.