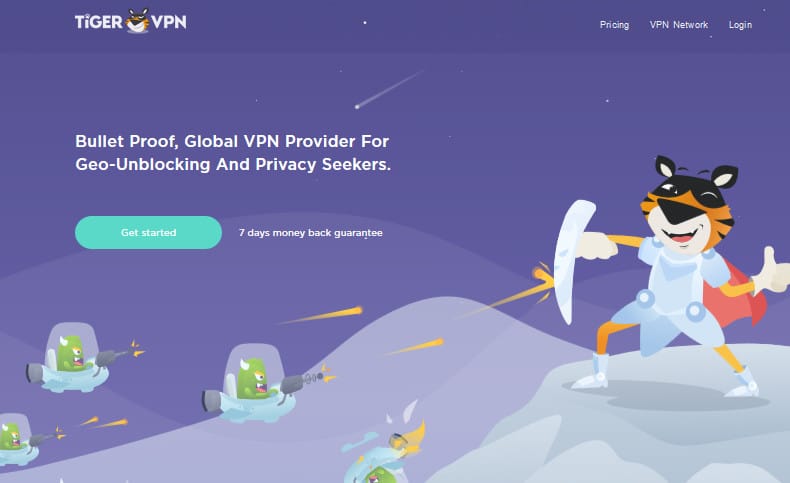 They’ve been around since 2011 but it wasn’t until 2016 that they really managed to put themselves on the map. TigerVPN achieved a rather massive overhaul a couple of years ago that saw them acquire a new look, new website, and various new improvements to their functionality and stability. TigerVPN has always marketed themselves to the less experienced crowd who want a simple yet effective virtual private network that is easy to understand and easy to use. We’ll be telling you just how well this VPN functions for newbies and even for veterans of these apps below.

The good news right off the bat is that TigerVPN has provided a very slick yet simple UI. It is easy to tell that they put good care into ensuring that their menus would not be confusing. They are so well designed that anyone who has never used a VPN before should have no problem with navigating the options available.

All of the most important features are readily available in plain sight: the list of servers, the connect button and the options for more system settings and preferences are clearly telegraphed. Plus the main menu itself is minimal but colorful enough to not appear overly monotone or sterile.

TigerVPN is multi-platform meaning that whether you use Mac, PC or smartphones that use Android or iOS you’ll be able to run it. It even features Linux compatibility so they made sure not to leave anyone out.

Arguably the most important aspect of any VPN, TigerVPN does a pretty good job of maintaining a solid connection. With over 300 servers in over 40 different countries, download speeds will of course vary depending on which server you select. But many tests have concluded that average download speeds can reach around 80mb/s, which is more than enough for a variety of activities like streaming, torrenting, online gaming, etc. You tend to see speeds decrease in the evening, but this is to be expected as after work hours always see an increased load.

While we thought the US servers did a great job, EU servers were much less stable or reliable. There are probably good times to switch over to a different continental server but for the majority of tests, the US servers were superior in just about every way.

As an extra bonus, TigerVPN also manages to bypass Netflix’s region lock protocol. This is quite commendable as most VPNs are blocked out of this. It works if you are outside of the US looking to gain access to the American database of content. If you yourself are an American then you’ll gain no benefit from this.

TigerVPN’s default protocol proxy is OpenVPN, a standard these days among many other private networks. While they give you the option to switch over to PPTP and other options, we recommend sticking with the default one, especially if you are new to VPNs in general.

Web traffic is encrypted with AES-256 bit security which is considered industry standard these days. 256 bit is very secure and highly encrypted, and will protect you from virtually any hacking attempt even though it isn’t the fastest kind there is.

TigerVPN’s logging policy is a little different from others. It’s still adequate but it has some fine print that needs to be gone over. While they don’t log any information that could be traced back to your identity or location, they do record bandwidth usage and time stamps, so nothing severe or incriminating. Regular traffic data and browsing histories and activities, the stuff you don’t want to be public, is kept secure and off the records as is expected of any proper VPN.

TigerVPN is a well-made service but it is not without its flaws. It doesn’t have a “kill switch” option, but this is admittedly a feature more geared towards users with intermediate levels of experience or more. A kill switch essentially shuts off your internet in the off chance that your VPN loses connection and makes your activity public once again. It’s basically a fail-safe. It isn’t a particularly complicated option to use so we don’t understand why it is not included.

There’s also the minor logging issue we noted from before. It isn’t too big a deal but we much prefer a more strict stance on the recording of information, incriminating or otherwise.

One last rather annoying aspect of TigerVPN is that they do a poor job of notifying you when your subscription is over. That means that you have to remember on your own when your plan is up, otherwise they will automatically renew your payment.

That leads us into their actual fees:

Luckily we can say that TigerVPN has some very affordable payment plans that are around average in cost. There are three options in total: one month, one year and three years, priced at $11.99, $6.67 and $3.22 respectively. Most VPNs do not offer a three year plan so in a way TigerVPN offers a payment option that is actually much cheaper than most others. A mere three dollars a month is a great value, assuming you are willing to be in it for the long haul.

In case you are not sure on which plan you think is best for you, you can always test out TigerVPN’s free trial mode. Instead of being timed off of days or weeks, the trial expires after you have used up the 500mb cap. There are also limited server options but the ones included in the trial are some of the more high quality American ones.

Editor's Rating
8.8 Overall
0 Users (0 votes)
Interface9
Privacy8
Speed8
Price10
Summary
While it isn't the best VPN on the market, it does a good job of the bare basics of what any good VPN needs, and then some. We also have to give extra credit to TigerVPN for marketing themselves to the amateur and beginner crowd because it is important for those who don’t yet know what they’re doing in regard to virtual private networks to start simple. Having Netflix compatibility is great, so if you were plan on using a VPN specifically for streaming sites, this is a good option.

We wish it came with a few more security features, and higher download speeds. But ultimately, TigerVPN does a solid job of appeasing the beginner crowds, even if it lacks the complexity and functionality to satisfy more demanding and picky users.
What people say... Leave your rating
Sort by: