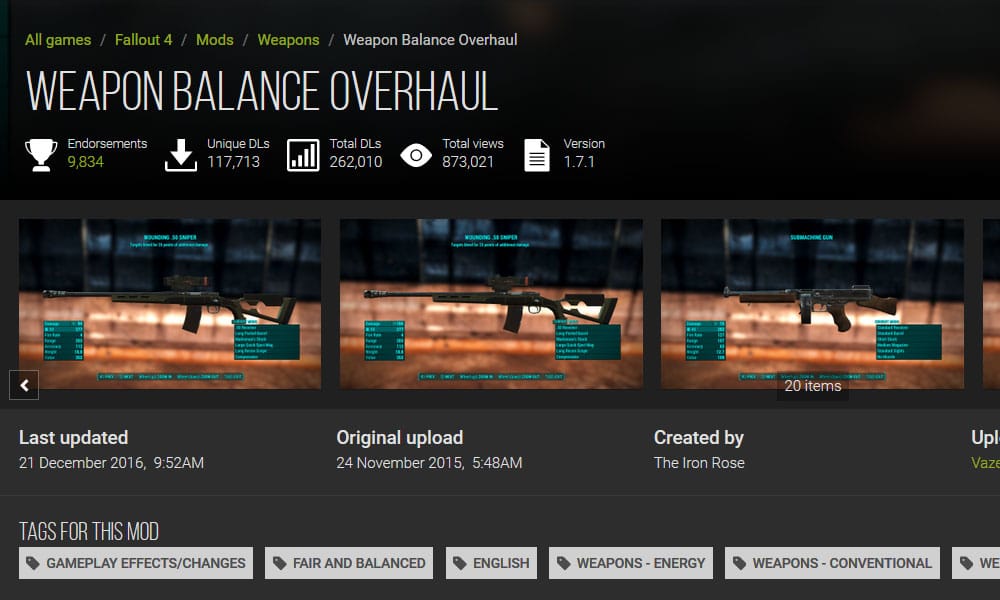 One of the most effective ways to truly optimize your build and your arsenal in Fallout 4 is to enhance your weaponry with the best weapon mods available. Weapon customization is a key element in learning how to survive the crazy Wasteland of Fallout 4, so having the best mods can really open up new worlds to how you play the game, or more simply, how your weapons are stylized.

Fallout 4, however, contains so many different weapon mods that it is hard to keep track of them all, let alone find the best ones. Check out the top 10 list below for a fantastic combination of mods that will either change how weapons look, or change how they fundamentally work.

The Weapon Balance Overhaul is a fantastic mod for anyone looking to replay Fallout 4 with a whole new set of rules placed on all weapons. Some people were annoyed at how quickly obsolete or how quickly overpowered certain weapons became. This mod fixes some of the balancing issues in Fallout 4 for both you the player and the enemies.

This weapon mod is a great way to keep veteran Fallout players on their toes and gives you a great reason to try out many more items that were once too weak to be viable.

With over 1.6 million downloads, See Through Scopes is by far one of the most popular Fallout 4 mods and with good reason. This comprehensive mod adds scopes onto many weapons and, as the name implies, makes many other scopes see through for a more realistic sniping experience. The mod even has some bonus features included customized reticles and adjustable weapon sway.

Get yourself one of the most popular magnums ever made with this great Desert Eagle weapon mod. It uses .44 ammo by default but is capable of being converted into either .38 or .50 caliber ammunition. If semi-auto handguns are your weapon of choice then you’ll love this weapon mod.

This highly customizable plasma weapon not only has lore-friendly looks but can be used in both automatic and semi-automatic firing methods. This is the mod to get for anyone who is a fan of the equally massive and powerful Gauss Rifle.

The Mosin Nagant is a famous Russian bolt-action sniper rifle known for its incredible range and stability. This mod not only delivers you this masterpiece of a rifle but comes complete with many accessories including a quad bayonet, a suppressor, iron sights and two different kinds of see through scopes.

Now you can have a plasma weapon that combines the best of conventional and energy-based firearms. The Accelerator is highly versatile and can be used as an SMG, an automatic rifle, a shotgun and even a rocket launcher. If you love both energy weapons and customizing your weapons until the sun sets then this mod will really scratch that itch you’ve got.

Technically, an explosion isn’t exactly a “weapon” but this mod is so cool and so underrated that we’re willing to overlook this caveat. Better Explosions essentially alters the physics of how explosions function in Fallout 4.

The title of the mod says they are “better” but what that really means is that they are now “more deadly.” Explosions now deal more damage, have a wider radius and even augmented the specific characteristics of certain grenades. Molotovs burn longer and cyro grenades slow your enemies down more. If you love playing as a demolition man, this is the number one Fallout 4 weapons mod you have to download now!

If creating a melee build is your bread and butter in Fallout 4 then this weapons mod was made just for you. This impressive collection adds a whopping 32 different melee weapons into Fallout 4, including a Chinese Greatsword, a Laserblade and an explosive weapon known only as the Gravity Fist. No melee or unarmed weapons build will truly be complete without this collection.

This behemoth of a ballistic rail gun fires cryo ammo at incredible speeds and is an incredible weapon for anyone that wants the ultimate in crowd control. It’s a perfect heavy weapon for Science-based builds and can even be tuned at a weapons bench for even greater cyro damage.

The Anti Material Rifle was a beloved weapon from Fallout: New Vegas and now you can have it once again in Fallout 4 with this simple mod. This is a .50 caliber weapon, so it packs quite a punch. But once you get used to its sheer firepower you’ll be hard pressed to find a better rifle to use as your main.