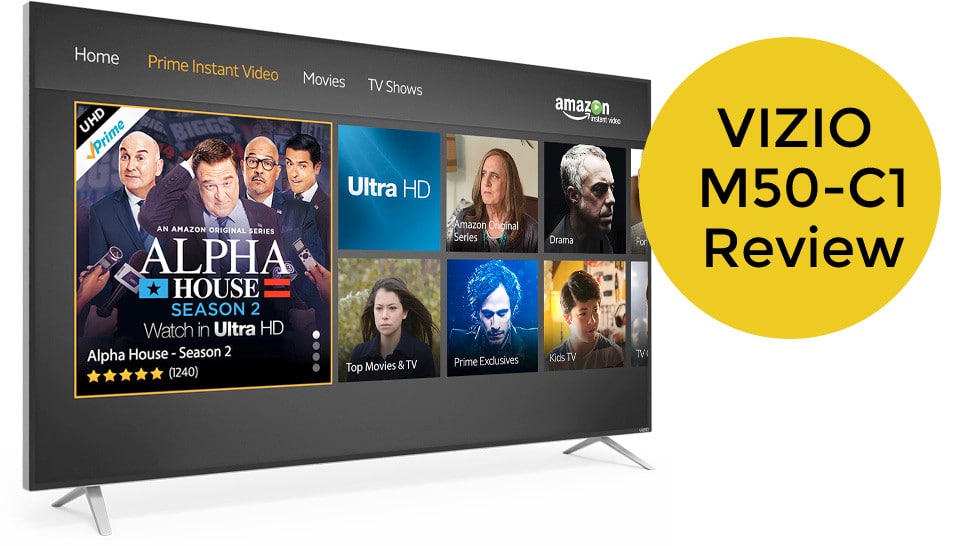 Vizio has made a name for themselves with their television sets over the years. They’re often considered one of the best name brands in the business, whether it be for standard 1080p sets, or the more recent 4K smart TVs. Vizio’s M50-c1 is one of their most popular models, and is one of the most recommended 4K TV sets out there when people ask for suggestions.

Here’s our breakdown of the pros and cons of this device:

Vizio’s M50-c1 displays 4K at 50 inches, and has Smart TV and wi-fi features. Full Array LED lighting is a commonly desired trait these days, though the lack of HDR (High Dynamic Range) will put off those who want that extra color accuracy or contrast ratio. The lack of 3D functionality would normally be a con, but with 3D failing to take off in the way that 4K currently is, we can’t imagine many people feeling like they’re missing out on that.

Arguably one of this TV’s most limiting downsides is the lack of 4K support for Youtube, which would be a big problem for many potential buyers. As of right now, Youtube is still the most comprehensive spot to locate 4K videos. The library of UHD programs offered by more conventional streaming services like Netflix is growing, but very gradually. Unless someone is a diehard fan of Stranger Things, Better Call Saul and Jessica Jones, Youtube is still going to be the most reliable place to discover 4K content. Anyone hoping to watch thousands of hours of 4K from Youtube will have to steer clear from the Vizio M50-c1.

As for gaming, this monitor is a good fit with a Playstation or an Xbox, most particularly the PS4 Pro and the Xbox One X, as they offer 4K support. While the input lag isn’t comparable with many PC monitors, it is much better than typical 4K TV sets, which are usually at around 30ms instead of the 20ms this device offers.

The ethernet port is another option one does not see very often on modern day TVs, but since streaming content in 4K can be a taxing task for many wireless connections, anyone who consistently watches Netflix in 4K for example could benefit from using a wired connection. Of course, one would have to have their router in their living room, or a very long ethernet cable.

But in the end, the main reason people buy a 4K TV is to upgrade from a non-4K TV, to obtain vastly superior picture quality. And while the M50-c1 does not have all the functionality as a more expensive model, it will absolutely please anyone who is still currently used to a 1080p set. Vizio did not skimp on the picture quality, and the colors and reduced motion blur combine together to create a silky smooth, rich looking experience.

Editor's Rating
7.4 Overall
0 Users (0 votes)
Picture Quality7.5
Sound Quality7
Design8
Smart Functions7
Summary
The question in the end becomes, do you want to buy this set and be satisfied with its picture quality, or do you want to spend at least double the cash for virtually the same TV, but with HDR, 4K Youtube videos and maybe some other extra perks? The Vizio M50-c1 is popular because of its value in offering the basics of a 4K Smart TV for a very low price. As long as you're fine with the lack of features discussed here, then it will be hard to find a more reliable and quality TV set than the M50-c1.
What people say... Leave your rating
Sort by: