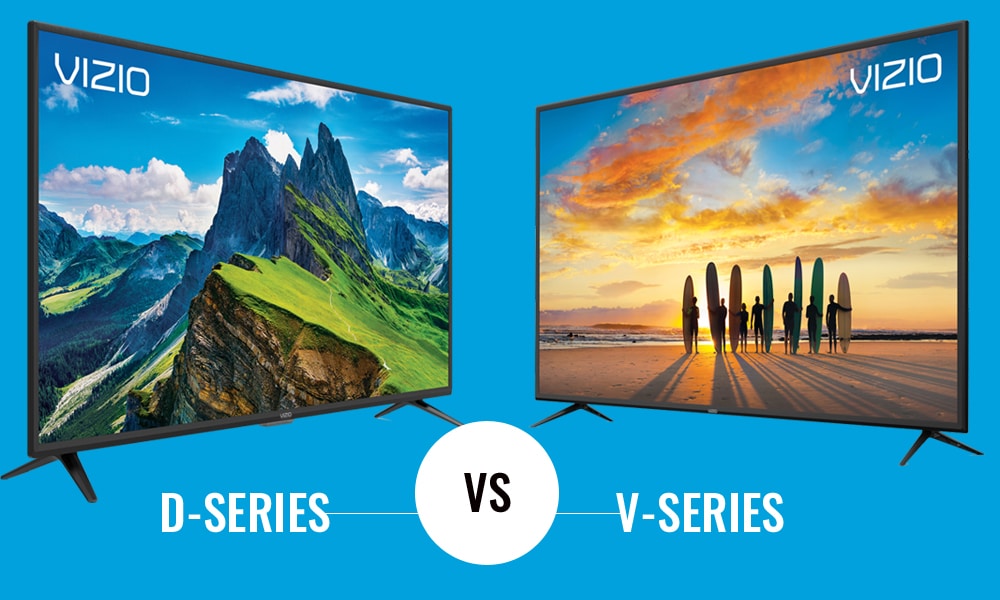 Vizio has become a very prolific TV manufacturer lately. With so many different models and series, it can get hard deciding on which one you want for yourself. To help narrow down the options, today I’ll be comparing the Vizio V series and the D series. There are some key differences between the two that should be properly outlined so that you can make your most informed buying decision.

What D Series and V Series Have in Common

Both the Vizio D Series and V Series were released in 2018 and 2019, making them relatively new models. They were designed to be budget level models so that more people could afford the benefits of a 4K HDR TV without having to break the bank.

Both the D Series and V Series are available in large sizes from 50 inches and up. They both come in 4K resolution and feature HDR 10 compatibility. Both also feature support for voice assistants such as the official Google Assistant or Amazon Alexa.

Both series also use LED screens with full array backlighting. Additionally, both series use SmartCast as their primary Smart TV OS.

In terms of sound quality, both TVs sounded the same to my ears. It was nothing terrible but was ultimately the same kind of average-at-best SQ I expect from most cheaper TV models. The Smart TV Functionality is also more or less identical between both series. SmartCast has issues with app compatibility and loading screens, plus both models have identical remote controls.

What Separates the D Series from the V Series

Despite the fact that both line-ups were released within a year of each other, the V Series is actually the newer one. While they have more in common than not in common, there are a few key differences that must be noted.

Because it’s a newer model with a few little upgrades, the Vizio V Series is more expensive, but surprisingly, the price is difference is actually quite small. Both series are actually in the same price range when comparing similar or equal size screens.

Here’s what was added to the Vizio V Series. For one thing, it has slightly better input lag. The D Series had very little of it in its own right but it does feel slightly smoother on the V models. The V series also has slightly better viewing angles, color accuracy and reflections.

Things that Vizio added to the V series include a higher refresh rate. The D Series only has 60hz but the V Series has 120hz, which makes it a better choice for handling the flickering of fast motion, particularly in video games.

The V Series also added Dolby Vision, although admittedly this particular iteration of it didn’t really feel like it added much to me.

At the end of the day, the V Series is extremely similar to the D Series but with a few minor additions for a slightly higher price.

For anyone considering which one of these series you should get, I would place my money on the Vizio V Series.

While the extra features aren’t really that much, they are worth the extra few dollars Vizio is asking for. If you plan on using this TV for gaming, the V Series has better input lag and refresh rates. The V Series also comes in more sizes which gives you more freedom for choosing how small or large you want your TV to be. Ultimately, the V Series is just like the D Series but ever so slightly more appealing.