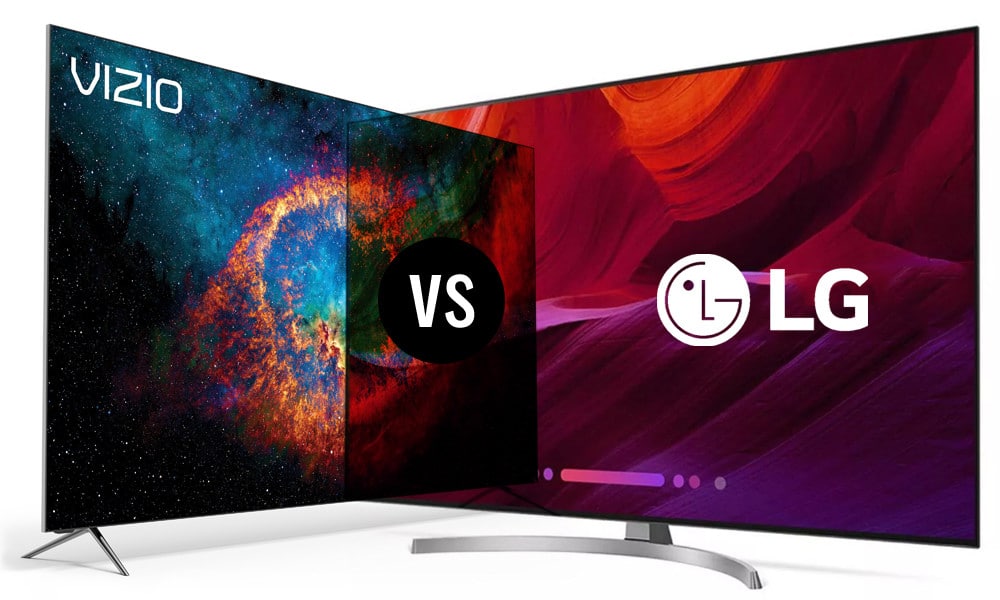 The technology of televisions these days is impressive. So much so that there are many different brands that offer an excellent viewing experience, making it harder to distinguish the wheat from the chaff.

Today we’re going to be taking a look at two of the more well-known TV manufacturers out there with our Vizio vs. LG matchup. We’ll be examining both brands under several important categories to get to the bottom of which company you should put your trust, and money, in.

One of the first things one needs to take into account when buying a new television set is its cost. While HD televisions, even ones that have 4K with HDR and Smart TV functionality, have been getting cheaper, there are still brands that will be noticeably less expensive than others.

When it comes to Vizio vs. LG this price difference compared to features received isn’t always very obvious. Take for example the Vizio P-Series Quantum vs. the LG 65SM8600. Both are 65 inch LED 4K Smart TVs and the Vizio model is more expensive by a couple hundred dollars. While LG seems to be the winner here, this doesn’t tell the whole story.

Most of the time LG actually produces the more expensive models, especially when looking at their largest TV sets like the LG OLED C9. And when looking at smaller TV sets in the 30-40 inch range, Vizio undoubtedly produces cheaper products like with their bestselling V405-G9 V-Series model. The fact is that Vizio stays alive in the game by making HDTVs for cheaper prices and offering a good value for said price.

A television set isn’t just supposed to look good but be made out of high quality materials so that it will last a long time. This includes components such as the frame, the leg stands and the glass used for the screen itself.

With Vizio sets, they often make relatively thin builds with slightly thicker leg stands. LG’s models are even thinner and will often be employed with center balancing stands as well as a pair of leg stands on either side of the set. LG also has thinner frame borders that are less noticeable when watching TV.

While both brands have sets made out of reliable materials, LG TVs often feel more sturdy and solid despite being a little thinner. They feel more stable when resting on a flat surface and their very frames feel more resistant to shock or wear and tear.

On the surface, it may seem hard to do a Vizio vs. LG comparison as they both produce televisions with similar specifications: 4K, Smart TVs, and they are often in similar screen sizes as well. It should also be mentioned that both Vizio and LG specialize in OLED and LCD screens, however there is more to investigate beyond aspects such as resolution or HDR support.

On the whole Vizio provides a more than satisfying balance of contrast, color quality and brightness, but LG sets go a step beyond this. When it comes to smoother refresh rates and viewing angles LG TVs deliver a more consistent quality. This is also true when looking at vibrant colors and deeper contrasts between dark and bright scenery as demonstrated by their Nano 9 Series.

If having the best possible picture quality is your number one priority then when it comes to the question of Vizio vs. LG, our answer has got to be LG without a doubt. Vizio certainly has better than average display quality despite their relatively low prices, but LG simply puts more effort and technology into more cutting edge picture vividness and fidelity.

More and more people are realizing that the stock speakers of a television set, even a high end TV, simply do not compare to a decent soundbar or surround sound setup. The same is true even for our Vizio vs. LG comparisons, but you still might be curious to find out which stock speakers are the better ones.

The short of it is that Vizio generally has speakers that are louder and can be more audible at longer distances. The Vizio SmartCast D-Series is a good example of this despite its relatively smaller size of 32 inches. While these TVs can produce volume, they are lacking when it comes to clarity. Voices and music are not as authentic sounding as they could be and picking out dialogue can sometimes be a bit of a chore, even at louder volumes.

With LG TVs, they are typically not as loud but have slightly better audio fidelity. Their speakers are less likely to become distorted while using louder volumes over time, and their speakers definitely have a little less signal noise in them which makes a variety of sounds easier to pick out without having to really concentrate hard on what you’re listening to.

While our recommendation for good quality sound is to always get a soundbar accessory or a nice set of speakers, if you want to skip this step and just find a TV set with adequate speaker quality then LG will be a better pick for you over Vizio.

Sometimes it isn’t enough for a TV set to have a high resolution and great contrast. These days we expect our televisions to do more than just have a fantastic display but to have many other supplementary features as well. This includes simple hardware features like extra ports to more cutting edge specifications such as detailed picture settings or functionality with apps or other hardware.

For Vizio Vs. LG both brands make Smart TVs as mentioned previously, but just how smart are they? One of the most advanced Vizio sets is the Vizio LED E80-E3 which supports Chromecast and Smart Cast via smartphone input, voice control through Google Home and compatibility with over 1000 apps.

For LG one of their flagship models is the LG 86-Inch Class QNED80. While a little pricey, this model has an AI driven processor which improves image and color quality. It is compatible with Google Assistant, Airplay and Alexa. It also has a comprehensive settings menu to calibrate your picture and your sound for optimization. Therefore we feel we have no choice but to recommend LG over Vizio for the TV consumer who wants the most out of their Smart TV’s capabilities.

In what is arguably a landslide victory, our answer to the question of Vizio vs. LG has got to be LG. While Vizio certainly offers great televisions for the price, LG simply wins when it comes to all other aspects of a television’s functionality and quality. If you are on a budget then you’ll still definitely be satisfied by what Vizio has to offer.

However, if you want a TV that is pushing more technological boundaries and will offer a cleaner and more authentic representation of color and light contrast, LG is clearly the victor here.

Thanks for reading our breakdown of Vizio vs. LG TVs. We hope this article has helped you come to a decision for which TV brand will be the better choice for your needs, and we hope that you will be fulfilled by whatever television set you end up choosing for yourself.