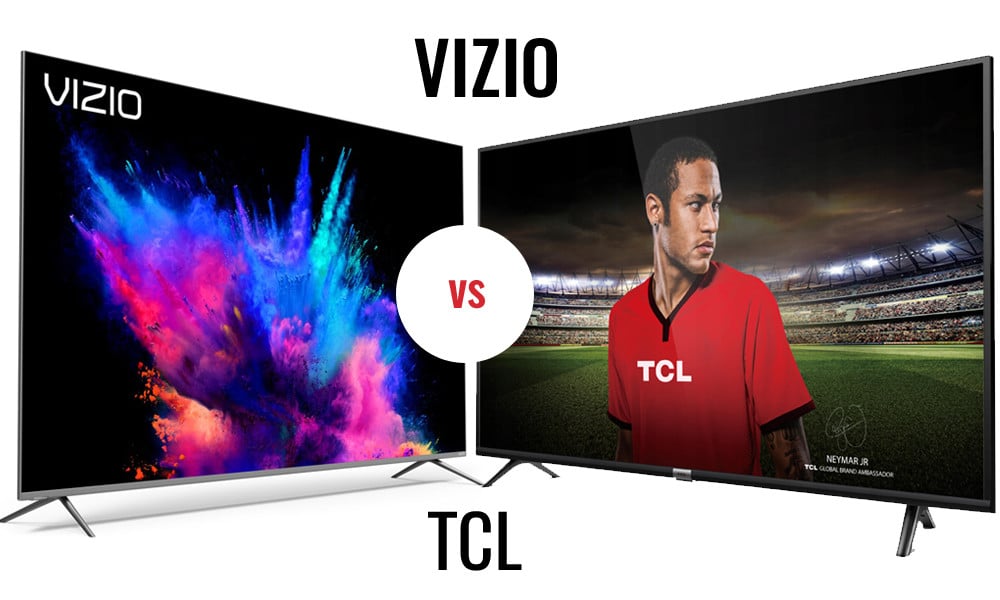 If you’re about to go shopping for a brand new high quality TV, then you might be wondering what the best deal you can get is. The good news is that you don’t need to spend several thousand dollars in order to get a great TV set that has modern day features and a beautiful display.

Brands such as Vizio or TCL have both become popular choices over the past couple of years for people who want to spend less but still come home with a great HD TV that will last them years. Thus, we present you this match-up we’ve prepared to finally solve the issue once and for all: Vizio vs. TCL TVs – which is better?

Both brands have a solid selection of large sized TVs with many different features but figuring out which one is really superior will involve a series of head-to-head comparisons on the most important aspects of a TV. If you’re ready to find out which one is the victor then continue reading below.

As mentioned above, there’s no doubt that the cheaper prices of both Vizio and TCL are a big selling point. Somehow both companies have managed to sell TV sets that are priced at what seems like a fraction of what they would be selling for if made by other companies.

Let’s start by comparing some mid-range television sets. One of Vizio’s more popular models is the D-Series G9, a 40 inch screen with 1080p resolution. The closest TCL equivalent to this would be the 40-S325, which is also 40 inches and at 1080p, but is slightly more expensive.

While this seems promising for Vizio so far, this trend doesn’t continue when we look at the higher end models of both brands. Vizio’s P-Series Quantum Class TV is more expensive than TCL’s 75R617 model even though both TVs are 75 inch Smart TVs with 4K and HDR.

The trend seems to be that Vizio is slightly cheaper when it comes to the most inexpensive models, but TCL is moderately cheaper for mid-priced and high end models. Therefore, I have no choice but to conclude that when it comes to price, TCL is overall the better option.

Some people may be concerned that cheaper TVs will have inferior build quality and as a result won’t last as long as they’re supposed to. Let me be clear and put those worries to rest – both TCL and Vizio manufacture TV sets of absolutely reliable quality. It’s one of the reasons why both brands have seen the amount of success that they have.

The truth is that this is actually the most difficult category to compare both brands because Vizio and TCL make very similar options when build quality is concerned. The differences lie in more minute details.

Vizio televisions tend to have slightly thinner frames than TCL sets even though both brands typically specialize in thin screens. Both brands have similar leg stands but Vizio’s are a little thicker which gives their TVs better stability when resting on a table or cabinet.

Even though both sets are extremely similar when it comes to the physical materials used, Vizio has the very slight edge here thanks to a better design with slimmer models which results in reduced weight and a more appealing sleek look overall.

To compare what is arguably the most important aspect of a television set, I’m going to have to talk about a lot more than just resolution or screen size. While both Vizio and TCL make modern day TV sets that have 4K resolution, high refresh rates and High Dynamic Range, there is a lot more that goes into picture quality besides these three attributes.

One of TCL’s flagship models is the Class 6-Series QLED 65R625 model which offers a very clean color palette and deep blacks for a very reasonable price. On the other side of the table is Vizio’s P-Series Quantum Class model. Both of these TVs have great specs but the P-Series Quantum goes a bit farther.

While it may be more expensive, the Quantum Class has better reflections and a higher response time. This means that it glare and input delay are reduced on this TV compared to high end TCL models. The Quantum Class also has a better representation of colors and contrast so that there will be less of a gradient filter masking the color palette. The Vizio TV also handles motion blur much better which makes it a great choice for action movies or fast-paced video games.

While TCL may offer 4K enabled sets at lower prices, this is not enough to offset the fact that Vizio makes superior products when many other visual factors are taken into consideration. If picture quality is the only thing you care about then Vizio receives my recommendation.

Unless you have an external sound system involving speakers or a soundbar ready, you’re going to have to rely on the internal speakers of the TV that you buy. While TV speakers just about never match the fidelity of a dedicated sound system, that still is no excuse to ignore how good the speakers really are because some will be better than others.

Vizio TV speakers actually score above average when it comes to sound quality. Many measurements show that they are capable of relaying more lower frequencies than other TVs, meaning that deeper sounds and bass-like effects will not only be more audible but more authentic sounding as well.

TCL TVs typically score in pretty average scores when it comes to harmonic distortion and frequency response, even their higher-end models. So if you want a TV that will deliver better than average sound, Vizio will have to be your choice.

Vizio and TCL both produce Smart TVs but that doesn’t mean their functionality is identical. Both companies employ pretty different interfaces and operating software which means you’ll get pretty different user experiences from either party.

While Vizio Smart TVs typically use SmartCast, TCL Smart TVs typically use Roku TV for their applications. I much prefer the latter as Roku TV has a cleaner interface that is easier on the eyes and even easier to use and navigate through. Roku TV OS also has better loading and it takes considerably less time to access apps such as Youtube.

TCL Smart TVs also give you access to a wider range of apps and features so that you have more customization and freedom when loading up your TV with whatever applications you prefer. So if you really care about Smart TV functionality, even more so than picture or sound quality, TCL will be your winning bet.

Now that we’ve gone over general characteristics, let’s compare specific models from both brands. The Vizio P Series and the TCL 6 Series seem fairly similar at first glance. Both are large screen 4K TVs that come in 55, 65 and 75 inch variants. However, the similarities pretty much end there.

However, at the end of the day the only thing the 6 Series can really offer over the P Series is the lower price. The Vizio P Series not only has better build quality but offers a nicer looking 4K resolution display. Additionally, the P Series also has much better local dimming and handles reflections and various lighting conditions much better, so you won’t have to worry about annoying glares.

The TCL 6 Series is a great choice for those who don’t want to break the bank. But if you can afford it, you will certainly be better off with the Vizio P Series thanks to its superior handling of lighting, colors and UHD display.

Unlike the P Series, the M Series is in a similar price range to the TCL 6 Series, making this a more fair and interesting match up.

Both series are more or less the same when it comes to viewing angles, contrast output and handling reflections. They both also have solid input lag at multiple resolutions, making both of them viable choices as gaming TVs.

I have to give this one to TCL, though. While some may prefer the M Series’ better 4K quality and build quality, the TCL 6 Series is still a tad less expensive, meaning it offers more bang for your buck. Add to that TCL’s better Smart TV functionality and top notch HDR and you have yourself a great television set for the price.

While the battle of Vizio Vs. TCL was a pretty close one, I have to say that the winner here overall is Vizio. Not only did they win three out of five categories but they were the clear victor when it came to picture quality, which is in my opinion the most important factor of any television set. TCL TVs are still great and they offer an almost unbeatable value, but Vizio knows how to deliver quality products that excel at what a TV is supposed to excel at.