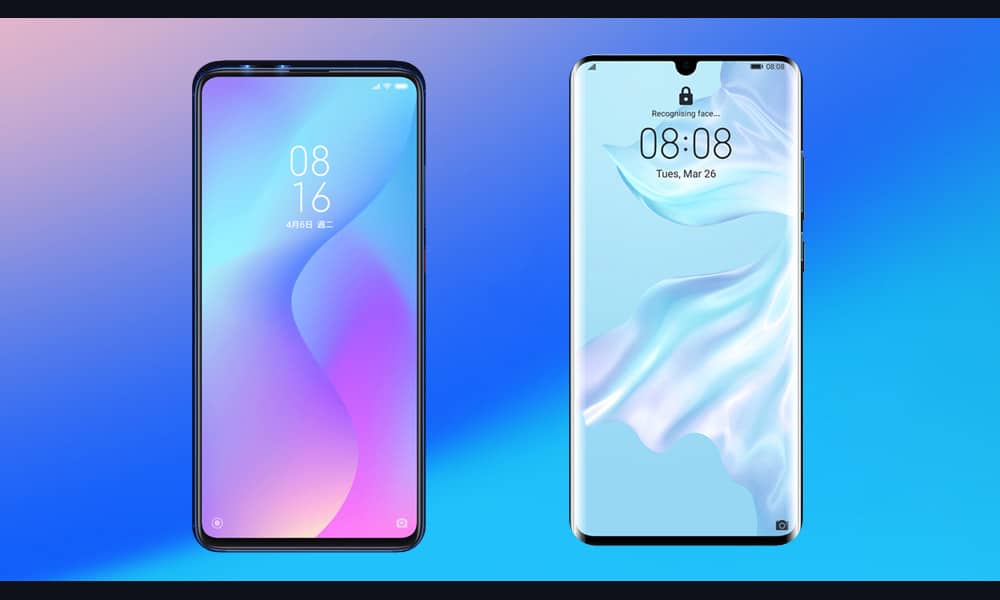 There are two companies out of China that are dominating the smartphone market: Xiaomi and Huawei. Although they’re certainly not the only Chinese smartphone manufacturers, they’re definitely the biggest.

Now that both phone companies have become very popular in many other countries around the world, you might be curious which one of them makes better phones overall.

I too was quite curious about how a Xiaomi vs Huawei battle would turn out. So after comparing the two different companies from multiple angles, I came to a conclusion.

If you’re curious what my final verdict is for these two companies then by all means, read on.

I think the most sensible thing to compare at first would be the two phone models that have massively helped in putting both Xiaomi and Huawei on the map respectively. Xiaomi’s Mi 9 and Huawei’s P30 Pro are both the bestselling models each company has. So if you have already decided on wanting to get the bestselling model of one of these companies, let me tell you which one has more bang for its buck.

For one thing, let’s take a look at some of their stats. While many people have correctly claimed that Xiaomi and Huawei make pretty similar phones, it is important to point out what the differences actually are.

With the P30 Pro, you’ll get a slightly larger screen, more storage space depending on the specific model you get, a stronger battery and a more powerful front camera. The Mi 9 is slightly thinner and has faster wireless charging as well as stronger rear cameras, but that’s about it.

While both devices are undeniably stylish and use pretty solid hardware, I have to give it up to the P30 Pro. The superior specifications mirrored my experience. The P30 Pro simply felt like an upgraded version of the Mi 9. While I don’t think people would be unsatisfied with the Mi 9, the P30 Pro delivers a little more when it comes to both power and convenience.

One of the big divides between the various models by Xiaomi and Huawei is that both companies seem to be excelling at different levels of pricing. While I thought Huawei’s flagship was better than Xiaomi’s, that story is a little different when we look at their budget models.

The thing about Xiaomi is that they sell many of their budget models such as the Mi 9T or the Mi Note 10 at lower prices because of the built-in ads that Xiaomi places in their phones. So even though a lot of their models come with some pretty impressive specs and performance for the price, they can still mark them at lower costs thanks to the ad revenue.

It’s a smart tactic, but might be a little annoying for some people who happen to really hate bloatware and ads.

Huawei phones on the other hand don’t have built-in ads, but the trade-off is that their phones are going to be more expensive on the whole, even if the specs are nearly identical.

So the question now becomes this: are the lower prices that Xiaomi offers on most of their phones worth the ads you have to deal with? In my opinion, the answer is yes.

Xiaomi’s advertising is a little more complex than one might expect. Not all of their models have built-in ads, such as the Mi A1 or A2, plus people in some regions using European models don’t get the ads over the OS at all. Also, there are allegedly ways in which the built-in ads can be suppressed or even removed altogether.

In short, the ads that are in some of their models are a small price to pay for the lower prices of many Xiaomi models.

While the whole tech world pretty much agrees that Xiaomi and Huawei have very similar hardware, the battle of Xiaomi vs Huawei can now only be determined by who has the better software.

When it comes to the operating software itself, both Xiaomi and Huawei are using Android OS—but there’s a catch. Each phone company uses a different UI that is stacked on top of the main Android OS for easier navigation and menu placement.

Although this is somewhat common practice with Android phones, it can make a big difference that is hard to compare on paper. I personally prefer the MIUI of Xiaomi phones but I admit this is totally just a personal preference, as the EMUI of Huawei phones is equally as intuitive.

However, what really separates the software of Xiaomi and Huawei is Google support. Huawei is allegedly in the middle of developing their own all new OS, but the odds are that it won’t have the full support of Google and their massive amount of downloadable apps after that. Xiaomi phones however don’t have this issue and you can have access to Google apps as much as you want.

So at the end of the day, both Xiaomi and Huawei phones have pretty similar hardware and pretty similar OS UIs, but the app support that Xiaomi has over Huawei ended up being the deciding factor that tipped the scales.

It can always be a little challenging deciding on which is the better company when they have so much in common, but I have to name the winner of the Xiaomi vs Huawei battle as Xiaomi. While I still believe that Huawei’s flagship P30 Pro is the better phone, Xiaomi overall is the more appealing brand thanks to their lower prices across the spectrum and their impressive Google apps support.

However, if I only had to recommend one phone among the entire catalog of both companies, it probably would end up being Huawei’s P30 Pro. But for almost any other circumstance, I would recommend another model by Xiaomi. Their phones still have the better value and I am more optimistic about this company’s future as they continue to put out seriously impressive mid-priced phones.

I hope you enjoyed this phone battle of Xiaomi vs Huawei and more importantly, I hope you have taken away some useful tips from this article. Thank you for reading and enjoy whichever new phone you decide on buying for yourself.