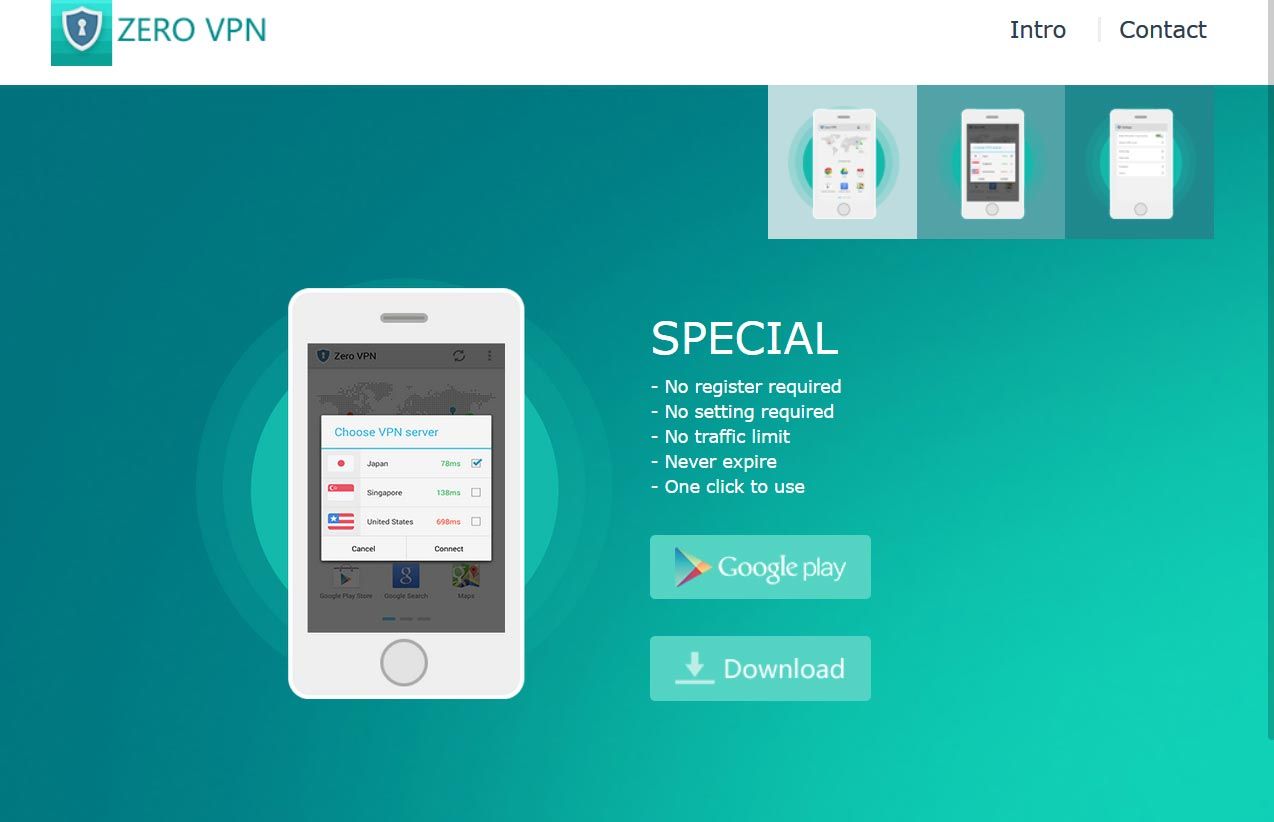 Zero VPN is an application designed for Android devices created by a company based in Hong Kong. Its main purpose is to unblock content that is inaccessible due to region restrictions or other such censoring tactics. It can be used to unblock games, videos or websites on Android devices, but if Zero VPN for PC is acquired, the same can be done on your desktop or laptop computer. This makes the emulated version of Zero VPN very desirable because internet browsing is much easier and convenient on PCs even though smartphones do offer the portability aspect.

Free, Safe, and Easy to Use

Zero VPN is quite safe and secure. It is completely free to use which means no payment information will be sent when downloaded such as receipts or invoices. You also do not need to register or give an email address or other personal information which helps sustain the anonymity appeal this app has for many users.

Zero VPN for PC or for Android devices helps to unblock content that is normally restricted in your region. This was originally designed to unblock Android games on web stores and app stores but it now includes websites, multimedia content, etc. This includes famous websites such as Facebook, Youtube, Twitter, Skype, Instagram and many more. Because of the extra care put into assuring security and anonymous usage, you can use Zero VPN for PC to connect to wi-fi hotspots and not worry about anyone stealing or seeing your personal info or other sensitive data. Your real IP address will be encrypted, along with all other network traffic.

The creators of Zero VPN promise that the free license will never expire, assuring you that you can use their product for free and never have to worry about an impending free trial.

Servers Located All Across the Globe

Zero VPN has a global network that spans multiple countries in order to provide server maintenance and performance that is high in quality. These countries include Japan, United States, Canada, United Kingdom, France, and other locations across Europe and Asia.

How to Install for Android

If you want to download Zero VPN, all you have to do is head on over to the Google App store and type in “zero vpn” into the search bar. The app will show up and can be downloaded and installed instantly. The app itself is not resource intensive at all, uses practically no extra battery life and is only 4.5mb large. Any smartphone or portable device will be able to handle the specification requirements of this application with zero problems.

Using Zero VPN for your smartphone is a real joy as you will soon have access to previously inaccessible online content. Being able to surf new areas of the web will surely be a liberating feeling for anyone who has been denied access to any content. But we argue that the real benefits of Zero VPN come from using it on a PC.

While internet browsing on the smartphone has become more popular in recent years, we believe that more conventional and traditional desktop browsing is superior in general. As such, we believe that Zero VPN for PC is also the superior experience. This is because internet browsing in general is much more intuitive and convenient. A keyboard is better than a touch screen keypad, you have a bigger screen for viewing images and videos, and computers are generally just faster and stronger than phones.

Accessing content in general, new or old, is better on desktops because of these reasons. Plus wired connections are almost always better than wireless ones, and you can’t get the benefits of an ethernet cable from your Android device. That’s why we highly recommend going the extra mile to go and set up Zero VPN for PC. We say extra mile even though it is actually quite simple.

First you are going to need an Android emulator. Android emulators essentially trick your computer into being able to support software that is normally compatible on a different platform. The emulator is like a desktop version of Android firmware which can then support Android software such as apps that are normally portable. We recommend the BlueStacks emulator as it is simple and easy to use and install.

Once you have downloaded BlueStacks, unzip the files and click on the .exe to begin installation, it’s a short and straightforward process. Once that is done, you will have to register an account with Bluestacks by providing an email address. Do not worry as this has no bearing on downloading Zero VPN for PC and your address will not be used for that specific program. Once your email registration is complete, type in “zero vpn” into the search bar and locate the app. Download it, and then you’re ready to browse any content you wish on the internet with total privacy and anonymity.

With Zero VPN for PC fully downloaded and installed onto your desktop or laptop, you’ll have total uncensored, unblocked, region-free browsing privileges and will be able to use the internet with freedom and full access.